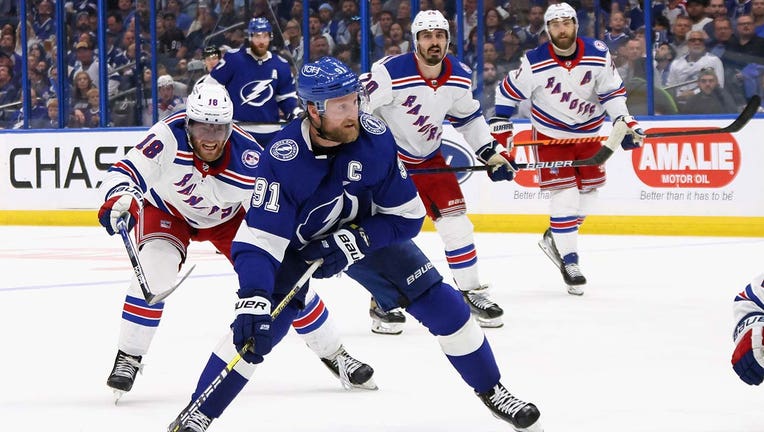 TAMPA, FLORIDA - JUNE 07: Steven Stamkos #91 of the Tampa Bay Lightning skates against the New York Rangers in Game Four of the Eastern Conference Final of the 2022 Stanley Cup Playoffs at Amalie Arena on June 07, 2022 in Tampa, Florida. (Photo by Br

NEW YORK - The Bolts will try to take their first series lead against the Rangers and snap the opposing team's eight-game home streak in Game 5 of the Eastern Conference Final.

There is no word yet whether Brayden Point will return tonight. He was spotted during an optional skate practice earlier this week. Point has been out since the first round against the Toronto Maple Leafs, recovering from a leg injury.

The Lightning will be looking to build on the momentum they created at home after showing signs of rust at the start of the series following a nine-day layoff after finishing a second-round sweep of Florida. Tampa Bay had won six straight before dropping the first two games against the Rangers.

The Lightning turned it around in this series by tightening up defensively, clogging New York’s passing lanes, and forcing most of the Rangers’ shots to come from outside. The few times they did get close, Vasilevskiy was there to shut the door.

"We’ve been desperate the last couple of games," Lightning captain Steven Stamkos said. "We knew how important they were to get back in this series, and we’ve done it. But we can’t sit on our hands now and be happy with that. We got to keep moving forward. ... I’m sure now that desperation is going to kick in for them."

Playing with an increased level of urgency, Tampa Bay — which has won 10 straight playoff series the last three postseasons — was also more disciplined in staying out of the penalty box. The Rangers, with the league’s best power play in the postseason, only had two chances in Game 4.

"They have an even exceptional power play, and so I spoke to Captain Obvious," Coach Jon Cooper said. "He says if you keep them off the power play, it’s probably going to help your game, and he was really right."