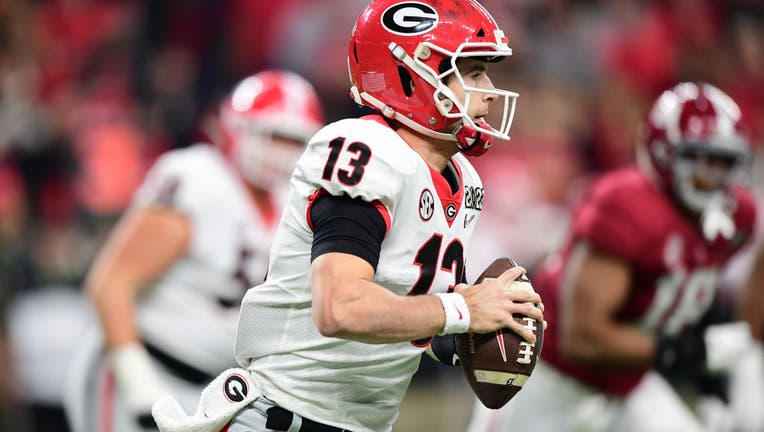 Stetson Bennett #13 of the Georgia Bulldogs looks to pass the ball in the first quarter of the game against the Alabama Crimson Tide during the 2022 CFP National Championship Game at Lucas Oil Stadium on January 10, 2022 in Indianapolis, Indiana. (Ph

INDIANAPOLIS - Georgia has ended its four-decade drought as National Champions after a tough defensive battle against Alabama on Monday. The Bulldogs beat the Crimson Tide 33-18.

The game was defined by two powerhouse defenses. No. 1 Alabama leads No. 3 Georgia 9-6 at halftime of the CFP championship game as each struggled to take it into the end zone.

HOW IT PLAYED OUT: GET A MINUTE-BY-MINUTE RECAP OF THE GAME AS IT HAPPENED

Bennett connected with Adonai Mitchell on a 40-yard touchdown to give No. 3 Georgia a 19-18 lead with 8:09 left and then hooked up with Brock Bowers for a 15-yard TD on a screen to put the Bulldogs up eight with 3:33 left. 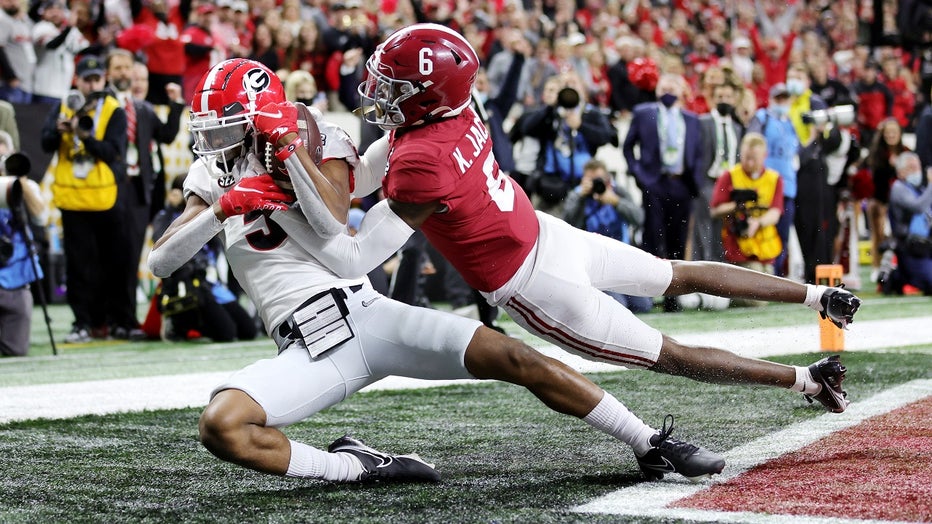 Adonai Mitchell #5 of the Georgia Bulldogs catches the ball for a touchdown against Khyree Jackson #6 of the Alabama Crimson Tide in the fourth quarter of the game during the 2022 CFP National Championship Game at Lucas Oil Stadium on January 10, 202

The final blow came from Georgia's dominant defense. Kelee Ringo intercepted an underthrown deep ball down the sideline by Heisman Trophy winner Bryce Young. Instead of going down with a little over a minute left, Ringo took off and behind a convoy of blockers and went 79 yards for a touchdown that set off a wild celebration by the Georgia fans who packed Lucas Oil Stadium.

The Bulldogs (14-1) hadn't won a national title since freshman Herschel Walker led them there in 1980. If simply snapping the drought wasn't good enough, doing against No. 1 Alabama (13-2) had to make it feel even better.

CELEBS TURN OUT FOR BIG GAME

Bennett, the former walk-on turned starter, finished 17 for 26 for 224 yards and no interceptions.

For most of the first three quarters, first CFP title game to be a rematch of a regular-season game was an ol' fashion Southeastern Conference defensive struggle. 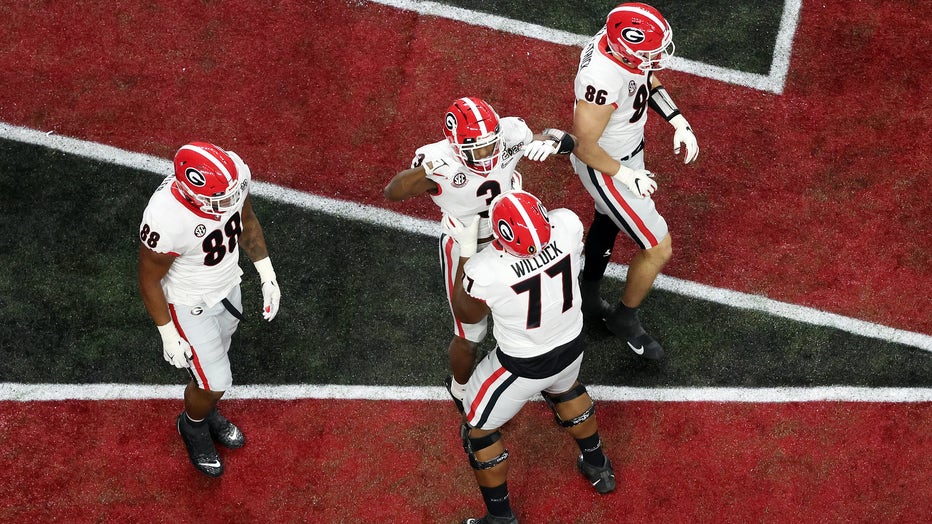 Zamir White #3 of the Georgia Bulldogs celebrates scoring a touchdown in the third quarter of the game against the Alabama Crimson Tide during the 2022 CFP National Championship Game at Lucas Oil Stadium on January 10, 2022 in Indianapolis, Indiana.

The first touchdown of the game came with 1:20 left in the third quarter. After James Cook broke a 67-yard run to get the Bulldogs into the red zone, three more running plays -- a facemask penalty by Alabama -- got them into the end zone. Zamir White went in standing up from a yard out with massive defensive tackles Jalen Carter and Jordan Davis leading the way as blockers. The Bulldogs led for the first time, 13-9.

After Alabama added another field goal, the Tide caught a break on strange looking turnover by the Bulldogs.

HOW ARE FANS CELEBRATING THE VICTORY? 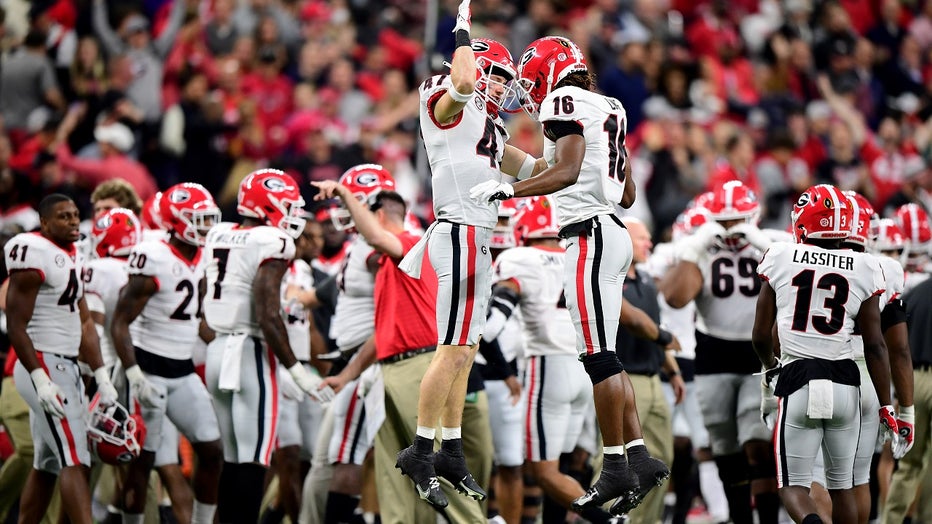 Payton Bowles #46 and Lewis Cine #16 of the Georgia Bulldogs reacts to a blocked field goal in the third quarter of the game against the Alabama Crimson Tide during the 2022 CFP National Championship Game at Lucas Oil Stadium on January 10, 2022 in I

As Bennett was being taken down deep in Georgia territory, he tried to throw the ball away. The ball slipped loose, and bounced toward the sideline, seemingly harmlessly. Alabama's Drew Sanders casually caught the ball as he was jogging out of bounds.

Surprisingly, the ruling on the field was a fumble, recovered by the Tide and replay upheld the call, giving the Tide the ball in the red zone. A few plays later, Young eluded the rush and found Cameron Latu for a 3-yard touchdown that put Alabama up 18-13 with 10:14 left in the fourth.

It felt again that Georgia would not be able to break whatever spell Alabama seemingly had on the Bulldogs.

Bennett was 13 for 22 for 141 yards as the next drive started, and you could practically hear all skeptical Georgia fans wondering why Smart didn't turn to his four-star back-up QB, J.T. Daniels, for a spark. 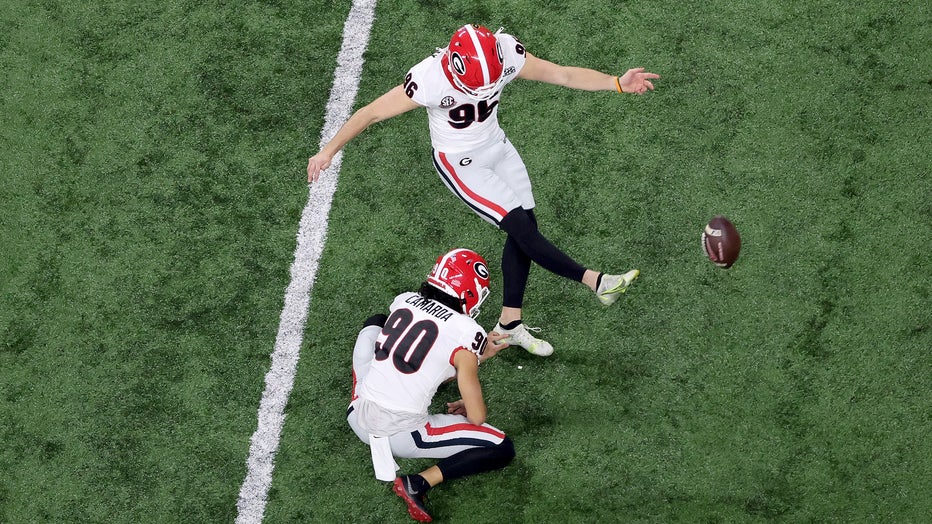 Jack Podlesny #96 of the Georgia Bulldogs kicks the ball for a field goal in the second quarter of the game against the Alabama Crimson Tide during the 2022 CFP National Championship Game at Lucas Oil Stadium on January 10, 2022 in Indianapolis, Indi

As he has done so many times during a career that started on the scout team and took a detour through junior college in Mississippi, the small-town Georgia kid nicknamed Mailman came through.

Bennett complete all three of his passes for 68 yards, including a long strike to Mitchell for a touchdown with 8:09 left that gave the Bulldogs a 19-18 lead after a failed 2-point conversion.

The Bulldogs' defense clamped down on Young, forcing a three-and-out on the Tide's next drive, and then Georgia went to work on sealing a long-awaited championship. 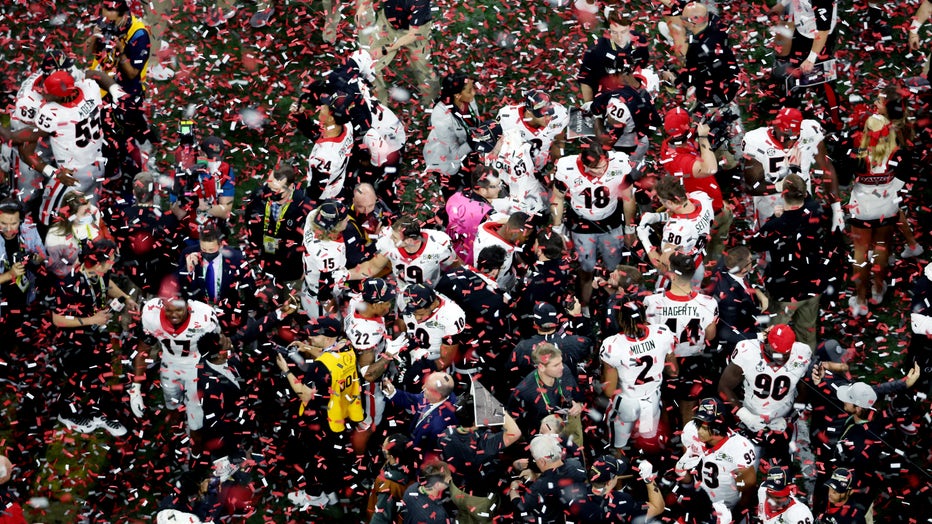