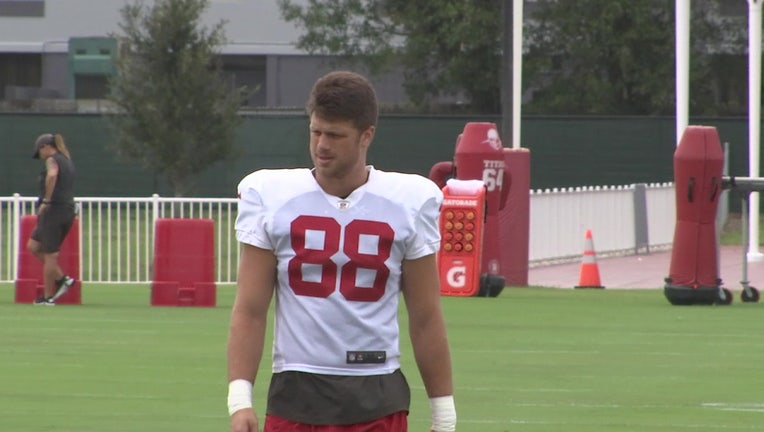 TAMPA, Fla. - Tight end Cade Otton is stepping up in the Tampa Bay Buccaneers time of need. With Rob Gronkowski in retirement and Cam Brate sidelined with a concussion, the rookie out of Washington turned in the best performance in his short career.

Against the Atlanta Falcons, Otton was on the field for 74 of the Bucs' 79 offensive snaps, the most among all skilled players hauling in six passes for 43 yards.

"I’m super thankful for the trust they’ve showed in me," said Otton. "I just hope I’m able to repay that on the field and do my job."

"He's a full tight end. Obviously, he can get better at blocking in a lot of ways, but he's willing, he tries, he sticks his face in there, he's not afraid of the competition, and he catches the ball well. So, we're happy with him," Bucs head coach Todd Bowles said.

"Yeah, he’s been balling," said Bucs player Antonie Winfield Jr. "He’s doing a great job for us. He’s been handling business. So, we just need him to keep doing his job."

It's been an emotional start to Otton's NFL career. His mother died of Parkinson’s disease just two days after he caught his first NFL interception against the New Orleans Saints in Week 2. He's found a way to carry on, carrying with him valuable lessons his mother instilled in him.

MORE: Boy tackled by security after running on field at Buccaneers game

Family is still a big factor in Otton's life. He spends most of this time away from the football field with his wife. The two were married in January 2021. The question is does she break down his film yet?

"She has a lot of thoughts after the game," laughed Otton. "She honestly knows what she's talking about. So that's been super fun. I kind of debrief with her and yeah, she's the best."

With his pro-career just getting started the Bucs believe better days are ahead.