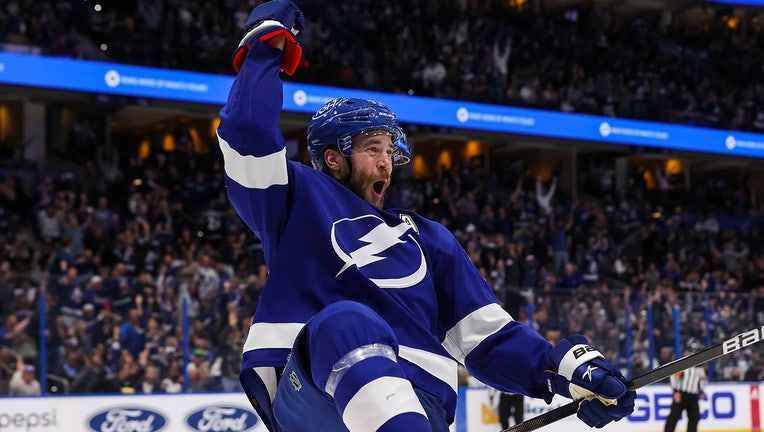 Victor Hedman celebrates a goal against the St. Louis Blues during the third period at Amalie Arena on December 2, 2021 in Tampa, Florida. (Photo by Mark LoMoglio/NHLI via Getty Images)

TAMPA, Fla. - Victor Hedman had two goals and an assist, and the Tampa Bay Lightning beat the St. Louis Blues 4-2 on Thursday night.

Tampa Bay also got goals from Ondrej Palat and Anthony Cirelli, and Andrei Vasilevskiy made 26 saves.

St. Louis starting goaltender Jordan Binnington and defenseman Justin Faulk were placed into COVID-19 protocols before the game. They joined center Tyler Bozak, who went on the list Tuesday.

The Blues recalled goalie Charlie Lindgren from Springfield of the AHL, but due to salary cap issues, he can’t join the team until Friday. St. Louis had former Grand Valley State player Kyle Konin as the emergency backup goalie. The 23-year old resides in the Tampa area.

Buchnevich scored with the man advantage at 7:16 of the third, and Hedman put the Lightning up 3-2 from just inside the blue line 53 seconds later. Hedman was left alone in the slot and made a nifty move to beat Husso 2:20 later.

Hedman also had two minor penalties during the final period.

Cirelli had a power-play goal early in the third.

The Blues' second-ranked power play converted their second chance when Saad tied it at 1 at 14:07 of the second off a nifty pass from the blue line by Robert Thomas.

Palat stopped a 10-game goal drought 7:16 midway through the first.

Steven Stamkos, who missed Tuesday’s 4-3 overtime loss at St. Louis due to the birth of his son, assisted on Palat’s goal and has a point (five assists, seven points) in each of his last five games.

Lightning: Coach Jon Cooper said RW Nikita Kucherov, out since Oct. 19 with a lower-body injury, is "inching towards" skating and remains out until probably after New Year’s Day.