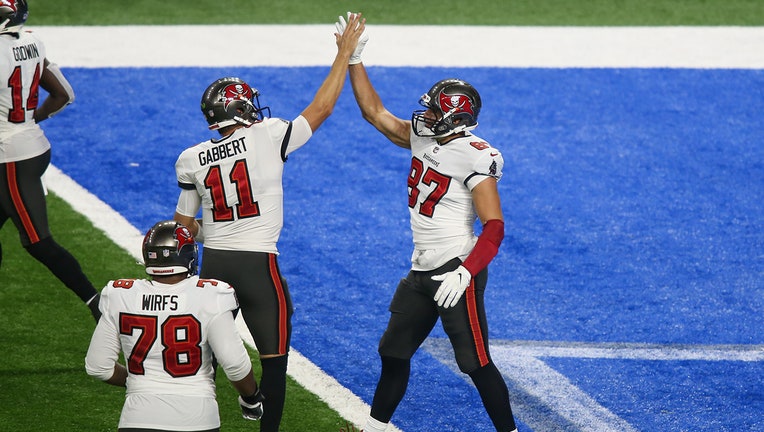 TAMPA, Fla. - Making the playoffs for the first time in 13 years is just a start for the Tampa Bay Buccaneers.

"We’re 10-5 and I know that gets us a spot, but I think there’s still a big week ahead of us for preparation and improving as a team," quarterback Tom Brady said.

"We’re playing better, we’re playing more consistently, and it’s been great to see," the six-time Super Bowl champion added. "There’s a lot of guys who have worked hard to get to this point."

Brady and coach Bruce Arians stress, though, the final week of the regular season is no time to rest on achieving a goal of ending the NFL’s second-longest playoff drought.

The Bucs are in for the first time since 2007. A win over the Atlanta Falcons next Sunday would clinch the No. 5 seed in the NFC, setting up a first-round road playoff matchup against whoever winds up being the NFC East champion. And that team will have a losing record.

"There’s going to be a bunch of teams that make it this year, and there’s only going to be one team that ends up happy," Brady said. "The more time we can spend improving as a team ... the better it is for us."

Arians reiterated the Bucs will practice and play to win this week, noting there’s a significant difference between finishing 11-5 rather than 10-6.

A chance to clinch a higher seed is a bonus.

"Eleven and five, that’s very rare. To have a chance to get to 11-5, keep that seeding – we want that seeding just for pride. We don’t care who we play, it’s more for pride," Arians said Monday.

"I’d probably have to beat some guys in the head with a stick to try and get them not to play anyway," the coach added. "I talked to them about it before and (they said), ‘I’m playing.’ We’re going to practice and play like everything depends on it. It’s not going to be an easy game, either."

The offense seems to be coming together at the right time. Over his past four quarters, Brady has thrown for 668 yards and six touchdowns without a turnover. The Bucs have scored 65 points in wiping out a 17-point second-half deficit in a win at Atlanta and rolled to a 34-0 halftime lead in a 47-7 rout of Detroit. The Bucs gained 410 yards in the first half against the Lions compared to 60 before halftime against the Falcons the previous week.

There was little to find fault with during the 40-point blowout of struggling Detroit. Arians, however, wasn’t happy with the team’s performance on special teams. Kicker Ryan Succop missed two extra points and a field goal, and the Lions avoided being shut out by returning a punt 74 yards for a touchdown.

After failing to get into the end zone in his first five games after joining the Bucs at midseason, wide receiver Antonio Brown has a TD catch in each of the past two games.

Despite the shortcomings on special teams against Detroit, Arians feels good about where the team’s overall performance as it heads toward the playoffs.

"We’re going to be a pretty tough out," the coach said. "I just like the way we’re playing football right now in all three phases."

Arians said it was too soon Monday to speculate whether running back Ronald Jones (finger, COVID list), cornerback Carlton Davis (groin) or safety Mike Edwards (hip) will be ready to play in next Sunday’s home finale against Atlanta.

8,220 — as in career receiving yards for wide receiver Mike Evans, who had a 10-catch, 181-yard, two-TD day against Detroit. He’s one of seven receivers in NFL history with 8,000-plus yards receiving as well as 60-plus TD receptions in the first seven seasons of a career. The others are Jerry Rice, Randy Moss, Sterling Sharpe, Larry Fitzgerald, Calvin Johnson and Marvin Harrison. Nice company.

With a win over Atlanta, the Bucs would finish with a 5-3 home record. The last time they won at least 11 games overall was 2005.