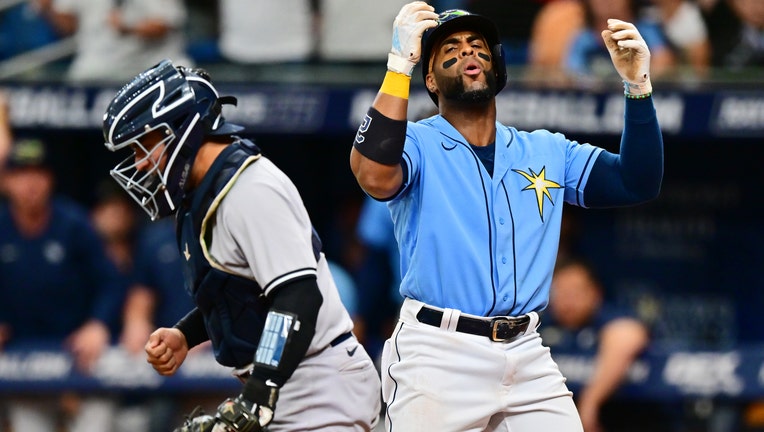 ST PETERSBURG, FLORIDA - SEPTEMBER 04: Yandy Diaz #2 of the Tampa Bay Rays reacts to a strikeout to lose the game 2-1 against the New York Yankees at Tropicana Field on September 04, 2022 in St Petersburg, Florida. (Photo by Julio Aguilar/Getty Image

Judge set a career high for homers, topping the 52 he hit as a rookie in 2017. He also doubled, singled and scored both New York runs.

Frankie Montas (5-11) allowed one hit over five shutout innings as the AL East-leading Yankees increased their lead to five games over Tampa Bay. The Rays trailed by 15 1/2 games on July 10.

Down 2-0, Tampa Bay tried to rally in the ninth against Clay Holmes, the fourth Yankees reliever. David Peralta led off with his second double of the game and scored on a one-out single by pinch-hitter Francisco Mejia.

Jonathan Aranda doubled with two outs before Holmes struck out Yandy Díaz looking at a 3-2 pitch for his 18th save. Díaz had already tossed his bat aside and was headed toward first base when plate umpire Vic Carapazza called strike three. Díaz slammed his batting helmet to the ground.

Yankees manager Aaron Boone was ejected in the fifth inning by Carapazza for arguing after Tampa Bay’s Taylor Walls reached on catcher’s interference.

The benches briefly emptied when Josh Donaldson took issue after a 3-0 pitch from Rays opener Shawn Armstrong was up-and-in leading off the second. Donaldson barked at the right-hander, but there were no significant incidents.

Judge connected on the second pitch of the game from Armstrong (2-2), sending a drive into the left-field stands. The slugger, who had a ninth-inning homer in Saturday’s 2-1 loss to the Rays, flied out to the edge of the warning track in center with two on to end the eighth.

Judge opened the seventh with a double, advanced to third on DJ LeMahieu's groundout and scored to make it 2-0 on a sacrifice fly by Oswaldo Cabrera.

Montas (5-11), who struck out seven without a walk, was pulled after making 93 pitches. The right-hander, 0-2 with a 7.01 ERA in his first five starts since being acquired from Oakland, had two outings earlier this season against the Rays while with the Athletics and has limited them to one earned run over 18 1/3 innings.

Tampa Bay loaded the bases with two out in the seventh before Jonathan Loaisiga retired Díaz on broken-bat grounder.

With runners on first and second with one out in the fifth, LeMahieu hit a foul that was caught by catcher Christian Bethancourt at the screen. Boone argued the ball gazed the netting, but the call stood after a video review.

Later in the fifth, struggling Giancarlo Stanton flied out to deep right with the base loaded to end the inning. He went 0 for 5, and has four hits in 35 at-bats since returning from an Achilles injury.

Yankees: OF Andrew Benintendi (right wrist) was scheduled to have a CT scan Sunday. … Boone is hopeful that 1B Anthony Rizzo (lower back) will resume baseball activities Monday.