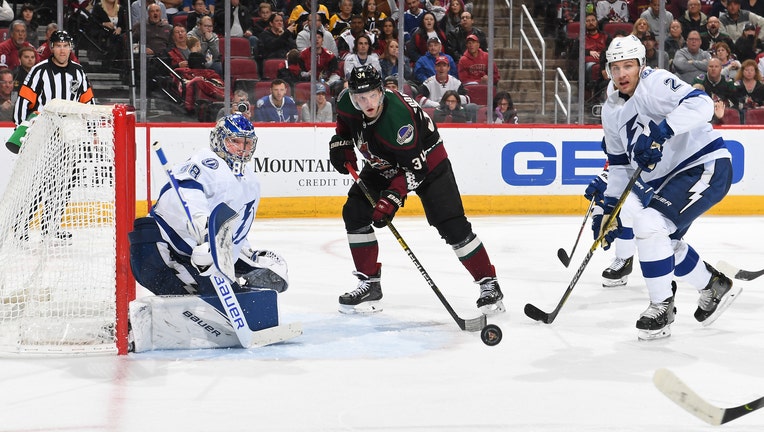 GLENDALE, ARIZONA - FEBRUARY 22: Carl Soderberg #34 of the Arizona Coyotes skates in on goal as goalie Andrei Vasilevskiy #88 and Luke Schenn #2 of the Tampa Bay Lightning watch as the puck is cleared wide of the net during the second period of the N

Glendale, Ariz. - Clayton Keller and Conor Garland each had two goals and an assist, leading the Arizona Coyotes to a 7-3 win over the Tampa Bay Lightning on Saturday night.

Keller’s goal on a breakaway at 11:51 of the third period gave Arizona a two-goal advantage. Garland added a power-play goal at 14:28, and Derek Stepan scored with 1:14 to play. The goal total was the highest of the season for the Coyotes.

Carl Soderberg and Brad Richardson scored and Taylor Hall had two assists. Antti Raanta made 27 saves. Arizona lost a two-goal lead during a wild second period, but picked up its third straight win at home with four unanswered goals.

Anthony Cirelli, Ondrej Palat and Brayden Point scored and Cameron Gaunce had two assists for the Lightning, who lost their second straight after their franchise-record 11-game winning streak came to an end. Andrei Vasilevskiy stopped 34 shots.

Arizona evened the score at 1 with 2:24 to play in the period. Garland gathered in the rebound of Ilya Lyubushkin’s shot and scored from the opposite side. It was Garland’s team-leading 21st of the season.

Seventy seconds later, Alex Goligoski dropped the puck off for Keller, who zipped a high wrist shot past Vasilevskiy for a 2-1 Coyotes lead after one period.

The Coyotes took advantage of an early second-period power play. As it wound down, Garland moved in on goal and turned around a defender enough to backhand a pass into the middle, where Soderberg was waiting and scored at 5:51.

The teams combined for three goals in a span of 2 minutes, 19 seconds of the second.

The Lightning made it 3-2 at 8:45 of the second on Palat’s rebound of a shot by Gaunce that Raanta saved initially. Moments later, Point put in a loose puck for his 22nd goal, set up by the efforts of Steven Stamkos and Nikita Kucherov, tying the score at 3-all.

The Coyotes responded quickly. Hall overpowered Lightning defenseman Braydon Coburn to force a turnover, then passed out from the boards while on his knees to Richardson, who scored his fifth of the season.

NOTES: Coyotes G Darcy Kuemper, an All-Star this season, was assigned to the Tucson Roadrunners of the AHL for conditioning purposes and played there Saturday. He’s missed more than two months with a lower body injury, and could play as soon as the Coyotes’ next game. … The Coyotes were without two other key contributors, D Jakob Chychrun and F Christian Fischer, out with lower body injuries. Chychrun could miss the next few games, coach Rick Tocchet said. … Lightning D Erik Cernak left the game in the second period with a lower body injury and didn’t return. … 2019 National League MVP Cody Bellinger of the Los Angeles Dodgers attended the game, hearing a mixture of boos and cheers despite wearing a Coyotes jersey and being from nearby Chandler, Arizona.