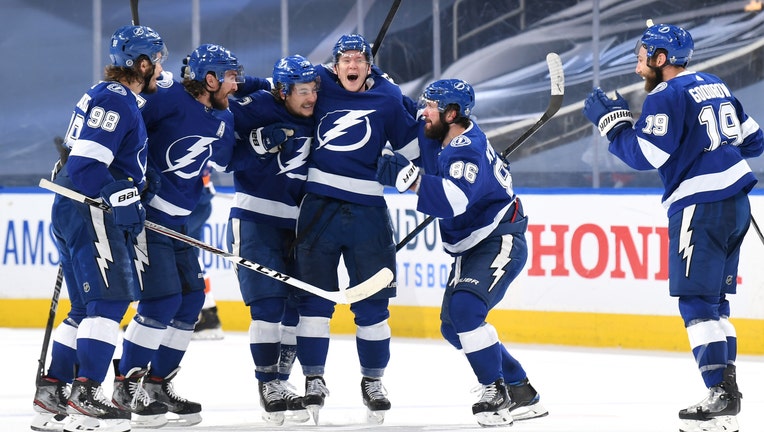 Mikhail Sergachev #98, Ryan McDonagh #27, Yanni Gourde #37, Ondrej Palat #18, Nikita Kucherov #86 and Barclay Goodrow #19 of the Tampa Bay Lightning celebrate shortly after the end of the third period their 2-1 win in Game Two of the Eastern Conferen

EDMONTON, Alberta - Nikita Kucherov scored with 8.8 seconds left to give the Tampa Bay Lightning a 2-1 victory over the New York Islanders on Wednesday night and a 2-0 series lead in the Eastern Conference final.

Kucherov beat Russian countryman Semyon Varlamov after a perfect pass from Ryan McDonagh, preventing the Lightning from going into another overtime game with a depleted forward group.

Leading scorer Brayden Point was injured late in the first period, and Tampa Bay also was without Alex Killorn much of the game after he was ejected for a hit from behind.

Andrei Vasilevskiy stopped 27 of the 28 shots he faced in Game 2. Varlamov made 19 saves. Tampa Bay is two wins from the Stanley Cup final, but Point's injury after he fell awkwardly on his last shift of the first period is a major concern for a group already without captain Steven Stamkos.

Two nights after Point scored 1:14 in, Matt Martin did the honors 1:24 in to give the Islanders the lead. A broken play helped defenseman Nick Leddy get behind the net, and he fed Martin for his fifth goal of the playoffs on a rare play in which Andrei Vasilevskiy lost sight of the puck.

Six minutes in, Killorn hit New York's Brock Nelson into the glass from behind and was ejected and given a 5-minute major penalty for boarding. After dressing just 11 forwards to keep seven defensemen in the lineup, Lightning were put in a tough spot by Killorn's absence that was made even worse when Point got injured.

They killed the penalty and got to the second intermission with the score tied after Victor Hedman scored off a faceoff with 1:35 left in the first period.

There were no goals throughout the second and most of the third until Kucherov scored his sixth of the postseason.

NOTES: Andrew Ladd played his first playoff game since 2016 and first game of any kind since March 10, replacing Derick Brassard in the Islanders lineup. ... Mitchell Stephens and Carter Verhaeghe are candidates to replace Point moving forward if he can't play, and they may both play if Tampa Bay goes back to the traditional 12 forwards and six defensemen setup.