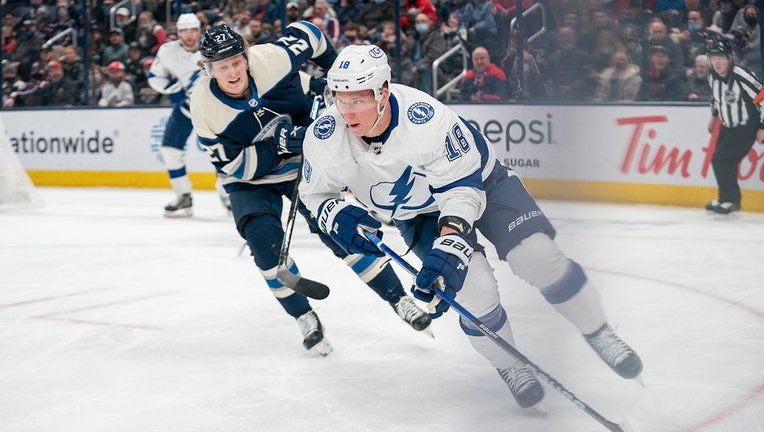 Ondrej Palat skates towards the puck during the game between the Columbus Blue Jackets and the Tampa Bay Lightning at Nationwide Arena in Columbus, Ohio on January 4, 2022. (Photo by Jason Mowry/Icon Sportswire via Getty Images)

COLUMBUS, Ohio - Ondrej Palat had two goals and an assist as the Tampa Bay Lightning trounced the Columbus Blue Jackets 7-2 on Tuesday night to break a three-game losing streak.

"Our team game was better," Lightning coach Jon Cooper said. "Obviously, it helped to get out to the lead we got out to in the beginning. We played with a little bit of confidence today, so it was good."

Gus Nyquist provided a goal and an assist for an illness-ravaged Columbus team, which dropped its fourth in a row against the Lightning. Dean Kukan also scored for the Blue Jackets.

Joonas Korpisalo made 29 saves for Columbus in his first start since Nov. 27, a span that included a stint in COVID-19 protocols.

Palat put Tampa Bay ahead 1-0 with a power-play goal 34 seconds into Sean Kuraly's first-period penalty, beating Korpisalo at 4:53. Palat's second goal — and 400th career point — came on a redirection of Ryan McDonagh's shot from the point at 9:30.

"It’s humbling," Palat said. "I’m just so happy. I’m in the NHL. I’m with the same team for so long and we had great success here. I’m helping my team and I would never have thought about getting this milestone."

Kukan made the most of his first game since Oct. 27, scoring 34 seconds into the second period to put Columbus on the board. Just 59 seconds later, Point upped the Lightning lead to 4-1 with a drive from the left circle.

Nyquist got the Blue Jackets within two again on his seventh goal of the season at 4:16, but Maroon made it 5-2 with Tampa Bay’s third power-play goal only eight seconds into Columbus’ fourth penalty of the night.

"We are in it right now and nobody feels sorry for us," Blue Jackets coach Brad Larsen said. "We can't feel sorry for ourselves. We are going to practice again and play again. After that we will play again. There are a lot of guys playing that told me they can play at this level and want to play big minutes at this level. Now is the time to show it."

IN SICKNESS AND IN HEALTH

Columbus forward Oliver Bjorkstrand played in his first game since Dec. 16 after coming out of COVID-19 protocols. Defenseman Zach Werenski was placed in COVID-19 protocols, as was Tampa Bay center Ross Colton. Columbus was also without second-leading scorer Alexandre Texier and defenseman Jake Bean, both sidelined with a non-COVID-19 illness, and Gregory Hofmann, who was placed on the non-roster list.

It’s especially tenuous to be a Blue Jackets goaltender these days. Daniil Tarasov left Saturday’s loss to Carolina with an injury. Elvis Merzlikins has not practiced due to a lower-body injury that might have occurred when he collided with teammate Jakub Voracek in the same game. Columbus added netminder Jean-Francois Berube from the American Hockey League’s Cleveland Monsters on emergency conditions from the taxi squad. Goaltender Cam Johnson of the ECHL’s Florida Everblades was added to the team’s taxi squad.

Point’s assists on both of Palat’s goals gave him points in four of five games since returning from the upper-body injury that sidelined him from Nov. 21 to Dec. 21.

Victor Hedman’s team-leading 28th assist for Tampa Bay pulled him even with Adam Fox of the New York Rangers for the NHL lead among defensemen.

For the seventh time this season, Columbus' schedule has been altered by COVID-19 challenges, as the Blue Jackets' game Jan. 18 at the New York Islanders was postponed due to rescheduling of the Islanders' own virus-impacted games.

Steven Stamkos’ assist on Killorn’s goal gave him 40 points in a season for the 12th time.