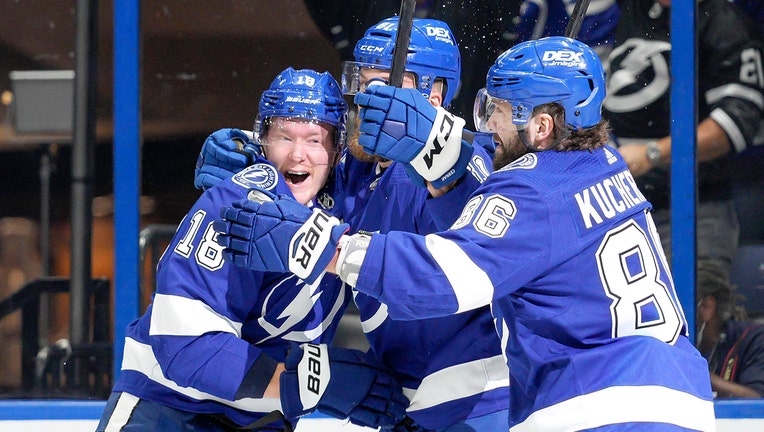 TAMPA, Fla. - After carrying the Montreal Canadiens to the Stanley Cup Final with sublime goaltending, Carey Price stopped just about everything he saw in Game 1 against the Tampa Bay Lightning.

The defending champions lead the series because they made sure Price didn't see very much and his teammates saw plenty of the rough stuff, shoved and banged into the boards and ice. Brendan Gallagher was left bloody, and the Canadiens were left beaten.

The Lightning created traffic in front of Price, scored two deflection goals and outmuscled the smaller Canadiens in a 5-1 rout Monday night that showed what it takes to crack Montreal's defensive wall. Tampa Bay flipped the script and did much of what the Canadiens' previous opponents couldn't, creating a potential blueprint to win a second consecutive championship.

The Lightning put on a clinical performance similar to what the Vegas Golden Knights did in their series opener last round against the Canadiens -- and they will need more of the same.

It was clear from the drop of the puck that coach Jon Cooper's team wanted to deliver body blows early and often.

Mikhail Sergachev sent 5-foot-9, 183-pound Canadiens forward Brendan Gallagher to the ice early. When Gallagher got into it with much larger Victor Hedman, Blake Coleman shoved him into the net, dislodging the net and his helmet.

In the third period, Gallagher took a shot up high from Coleman and was taken down by Sergachev. He got up with his forehead dripping with blood and left the ice.

The rough stuff between and after the whistles set an early tone for the series, and the plan of attack to take Price's eyes away worked like a charm. When his teammates made defensive mistakes like leaving Steven Stamkos wide open or letting Tyler Johnson get in on net all alone, Price was there to flash a big glove or pad save.

The most precious piece of silver in sports is bringing gold to Tampa Bay businesses. As the Stanley Cup Final kicks off with the Lightning playing at Amalie Arena, money is pouring into businesses that have had their toughest year in memory.

Price shuffled in the crease all night trying to get in better position to see around and through big Lightning forwards and his own defenders, which was something he didn't have to do as much in earlier rounds of the plaoffs. The first three goals against him were Erik Cernak's stick deflection, Blake Coleman's shot that banked in off Yanni Gourde's left skate and Ben Chiarot putting the puck in his own net.

Price allowed five goals for the first time this postseason.

The Lightning did a good job studying what the Canadiens did in previous rounds -- rope-a-doping, relying on Price to make saves and turning simple mistakes into big goals. Learning from a turnover-prone loss to the New York Islanders that made them play a Game 7 in the semifinals, they gave Montreal little to work with to turn the tables.

When the Canadiens did get good looks, goaltender Andrei Vasilevskiy turned aside captain Shea Weber off the rush and flashed his glove to rob forward Josh Anderson. The only blemish against Vasilevskiy and the Lightning was a double deflection pinball goal.

Even that didn't derail the Lightning from playing the kind of physical game they need to in this series. It's early, but the physical toll already started to add up for the Canadiens.

"They're a big physical team, but it goes both ways when you're trying to play physical," Chiarot said on NBCSN at the second intermission. "It wears both sides down, so we're trying to lay some physicality on them and see how they respond."

Based on what the Golden Knights found out after winning Game 1 against Montreal and the Winnipeg Jets and Toronto Maple Leafs discovered falling behind in their series, the response is coming from the Canadiens. The question is whether the Lightning found a script they can repeat with success as the final unfolds.