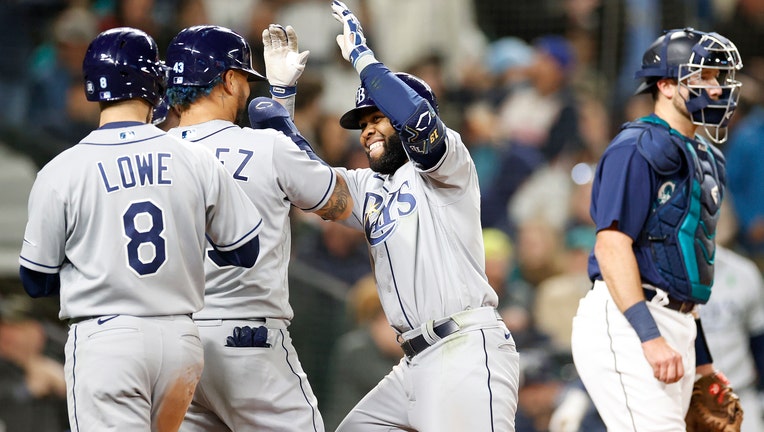 SEATTLE, WASHINGTON - MAY 07: Manuel Margot #13 of the Tampa Bay Rays celebrates his grand slam against the Seattle Mariners during the eighth inning at T-Mobile Park on May 07, 2022 in Seattle, Washington. (Photo by Steph Chambers/Getty Images)

Lowe hit the second pitch of the fourth inning to deep right-center field for his fourth homer of the season. He came back up with one out in the sixth and jumped on the first pitch from Gonzales, hitting it out to right field.

"That was really encouraging, good for Brandon," Tampa Bay manager Kevin Cash said. "I know he likes hitting home runs. We like it when he hits home runs."

Margot, who hit a game-winning, three-run homer in the ninth inning on Friday night, capped an eighth inning meltdown by Seattle reliever Diego Castillo. He hit the first pitch into the left-field bullpens. Castillo failed to record an out and allowed five earned runs.

"If we don’t control the strike zone, in this league, you’re going to have some tough nights. And that’s what we’re going through right now," Seattle manager Scott Servais said.

Rasmussen also pitched out of a bases-loaded jam in the third, getting a short fly ball from Ty France and a ground out by J.P. Crawford to end the threat.

Rasmussen allowed five hits and struck out five. The native of Spokane, Washington, had a few dozen friends and family in attendance for the start.

"One of the cool things about coming home is the people, but also that can be a little bit of a distraction," Rasmussen said. "So I tried to do my best to kind of have tunnel vision and then go out there and do my job and try and help the team win. So to have success was great."

Abraham Toro hit a solo homer in the ninth for Seattle.

Gonzales (1-4) struggled with control, walking four and going deep into counts to several batters. Gonzales lasted 5 1/3 innings and threw 98 pitches. It was the sixth time in his his career that Gonzales walked four or more batters in a start.

"I fell behind in the count a couple times and just unfortunately couldn’t get myself back in at the right moment and from there it turned into a battle," Gonzales said.

Tampa Bay optioned LHP Josh Fleming to Triple-A Durham and recalled right-hander Ralph Garza Jr. on Saturday. Fleming threw 2 2/3 innings and allowed four hits, two runs and walked three batters in Friday’s game against Seattle. It will be Garza’s second stint with the Rays this season after being claimed off waivers from Boston.

Cash also said LHP Jeffrey Springs will step into a starter's role beginning Monday night against the Angels. He was uncertain whether an opener would be used.

Rays: 1B Ji-Man Choi (elbow) took part in a full pregame workout and could be activated as early as Sunday. ... Cash said several injured pitchers have upcoming bullpens or side session as they continue in their recovery, including RHP Nick Anderson (elbow), RHP Shane Baz (elbow), RHP Pete Fairbanks (lat strain), LHP Brendan McKay, LHP Luis Patino (oblique) and RHP Phoenix Sanders (back). Cash said RHP Chris Mazza is continuing to have issues with back spasms.

Mariners: Crawford left the game in the fifth inning due to back spasms. Crawford dove head-first into first base trying to beat out a grounder in the third inning. ... C Tom Murphy was placed on the 10-day injured list after dislocating his left shoulder trying to make a sweep tag in Friday’s loss. Murphy had issues with the shoulder popping out in the past and will have an MRI to check for further damage.

Rays: Tampa Bay is expected to use an opener.

Mariners: Top prospect George Kirby will make his major league debut on Sunday. Kirby was Seattle’s’ first-round pick in 2019 and contended with Matt Brash for the fifth spot in the rotation during spring training.