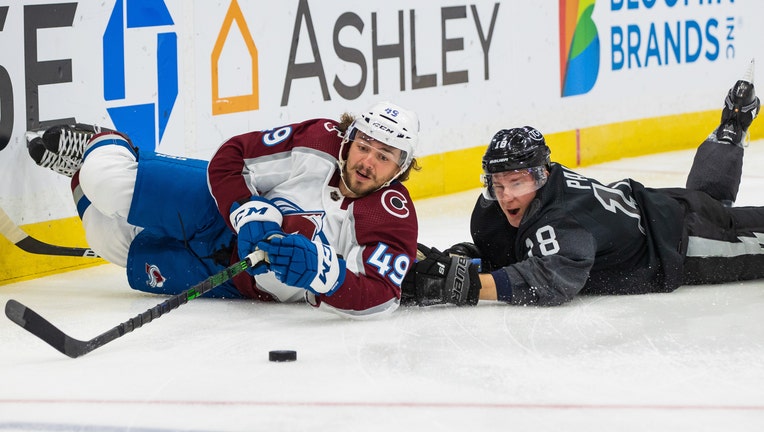 TAMPA, FL - OCTOBER 23: Ondrej Palat #18 of the Tampa Bay Lightning battles for the puck against Samuel Girard #49 of the Colorado Avalanche during the first period at Amalie Arena on October 23, 2021 in Tampa, Florida. (Photo by Mark LoMoglio/NHLI v

TAMPA, Fla. - Cale Makar scored in the sixth round of the shootout to give the Colorado Avalanche a 4-3 win over the Tampa Bay Lightning on Saturday night.

Makar beat Andrei Vasilevskiy with a wrist shot after Darcy Kuemper denied Anthony Cirelli to begin the sixth round as the Avalanche ended a three-game losing streak.

"You just can’t afford in this league to not be carving points out on a regular basis, and we haven’t done this so far. Tonight I thought we played with real good purpose, we were definitely a more connected group," Colorado coach Jared Bednar said. "I thought it was a really good hockey game by both teams.

"Our guys got a little reward for doing things right and working as hard as they did, and you’ve got to get that reward once in a while."

Tampa Bay’s Brayden Point tied the game 3-3 with 2:35 remaining in the third period, beating Kuemper with a slap shot from the high slot after the Lightning pulled Vasilevskiy for a sixth attacker seven seconds earlier.

The Lightning are 2-2-1 despite not leading at any point in regulation during their first five games, but coach Jon Cooper isn’t alarmed at seeing his team having to play catch-up so often.

"It’s not going to last forever," Cooper said. "Give the guys credit -- they’ve picked up five points. I like a lot of what I’ve seen. Tonight we didn’t win the skills contest."

MacKinnon put the Avalanche ahead 3-2 at 9:50 of the third when he beat Vasilevskiy with a power-play one-timer from the top of the left circle for his first goal of the season.

"It’s always nice to get that zero gone," MacKinnon said. "You can say all the right things, blah, blah, blah, but you want to score goals. I’d be lying saying it doesn’t feel good to get the zero gone."

Gabriel Landeskog and Mikko Rantanen also scored, and Kuemper made 29 saves for Colorado, which had lost three in a row after defeating the Chicago Blackhawks 4-2 in its season opener.

Mathieu Joseph and Steven Stamkos scored, and Vasilevskiy made 24 saves for Tampa Bay. Stamkos also had an assist on Point’s goal, giving him 875 career points and moving him past Vincent Lecavalier for second all-time in Lightning history. Martin St. Louis is first with 953.

Tampa Bay tied the game 2-2 at 3:44 of the third period when Stamkos redirected a shot by Ondrej Palat past Kuemper for his fourth goal of the season.

Rantanen put the Avalanche ahead 2-1 at 11:51 of the period when he beat Vasilevskiy from the right circle, converting a pass from MacKinnon on a 2-on-1 break for his third goal of the season.

Colorado opened the scoring at 9:02 of the first period when Landeskog banged the rebound of MacKinnon’s shot past Vasilevskiy for his second of the season. Tampa Bay tied the game when Joseph swatted a puck out of midair and past Kuemper at 6:34 of the second period for his first of the season.

"It’s the process, not the results," Stamkos said. "It wasn’t a bad effort, and we got a point."

The Lightning have not scored a first-period goal in their first five games, the only team in the NHL that hasn’t scored at least once in the opening 20 minutes. They also have yet to win a game in regulation.

MacKinnon has 23 points (10 goals, 13 assists) in 15 career games against the Lightning. The only player in franchise history with more points against Tampa Bay is current general manager Joe Sakic, with 32.

The Lightning claimed forward Alex Barre-Boulet on waivers from the Seattle Kraken after losing him on waivers to the NHL’s newest franchise 13 days ago.