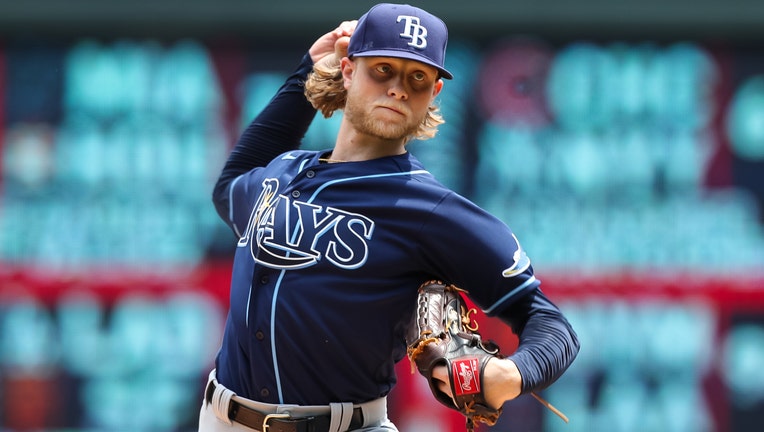 MINNEAPOLIS, MN - JUNE 11: Shane Baz #11 of the Tampa Bay Rays delivers a pitch against the Minnesota Twins in the first inning of the game at Target Field on June 11, 2022 in Minneapolis, Minnesota. (Photo by David Berding/Getty Images)

Arraez got at least three hits for the seventh time this season, raising his average to .367. He has three home runs this year, including two in the last three games.

"No, never," Arraez said when asked if he's now a power hitter. "I just try to hit the ball. ... Felt really good. When I hit that ball far, it felt amazing."

Trevor Megill (2-1), one of five Twins relievers who each pitched a scoreless inning, worked the fifth. Emilio Pagán earned his eighth save as the Twins took the first two games of the series.

Baz, who made four strong rehab starts with Triple-A Durham, looked crisp early with two perfect innings before running into trouble in the third.

Gilbert Celestino led off with a single and then Baz, the dynamic right-hander, walked the next two hitters ahead of Arraez, whose slam put the Twins ahead 4-3 and was followed with a big bat flip that went several feet in the air.

"After that walk, I’ve got to reel it back in after that," Baz said. "So, nothing felt different. It was just, I think, a matter of making a focus on putting the ball in the zone."

The Twins have beat up on starting pitching during the homestand.

They sent Jameson Taillon, Nestor Cortes and Gerrit Cole to season highs in runs in the three games against New York and did the same to Drew Rasmussen for Tampa Bay on Friday.

"I don’t know if the guys feel like it’s a challenge or not, but it’s a tough stretch," Minnesota manager Rocco Baldelli said. "And not only are we facing good teams, we’re facing good individual starting pitchers that are out there on the mound with excellent stuff every night this week. And we’ve gone out there and I think we’ve been as good offensively as we’ve been all year long."

The big inning, the second time the Twins batted around and scored at least five runs in an inning in as many games against the Rays, negated Tampa Bay’s quick start against Chi Chi González.

Ji-Man Choi had an RBI single and Yandy Díaz followed with a two-run single in the first.

González was recalled from Triple-A St. Paul to make the spot start for Minnesota’s injury-riddled rotation that is without Sonny Gray, Joe Ryan, Bailey Ober and Josh Winder because of injury. Chris Paddack was also lost for the season after Tommy John elbow reconstruction. González, in his second stint with the Twins this season, surrendered three runs on eight hits in four innings.

Baldelli said Gray (right pectoral strain) and Ryan (COVID-19) will rejoin the rotation this week, and Winder (right shoulder impingement) will make another rehab start and is nearing a return.

Rays: RHP Andrew Kittredge was transferred to the 60-day injured list to open a spot on the 40-man roster for Baz. The team announced Kittredge will undergo Tommy John surgery on June 22 by Dr. Keith Meister. RHP Ralph Garza Jr. was optioned to Triple-A Durham to make room on the active roster for Baz.

Twins: OF Byron Buxton and SS Carlos Correa were out of the lineup with each getting a scheduled day off. … SS Royce Lewis was placed on the 60-day injured list to make room on the 40-man roster for González. Lewis will have surgery to repair the ACL in his right knee and miss the remainder of the season. RHP Yennier Cano was optioned to Triple-A in a corresponding move for González.

Jeffrey Springs (2-2, 1.62 ERA) will start the series finale on Sunday for Tampa Bay. Minnesota counters with RHP Cole Sands (0-2, 8.49). Springs joined the Rays rotation on May 9 and is 1-2 with a 2.01 ERA in six starts since, with 31 strikeouts in 31 1/3 innings. Sands will make his third major league start with the Twins dealing with injuries in the rotation. Sands has allowed eight earned runs in 7 2/3 innings in his first two starts.