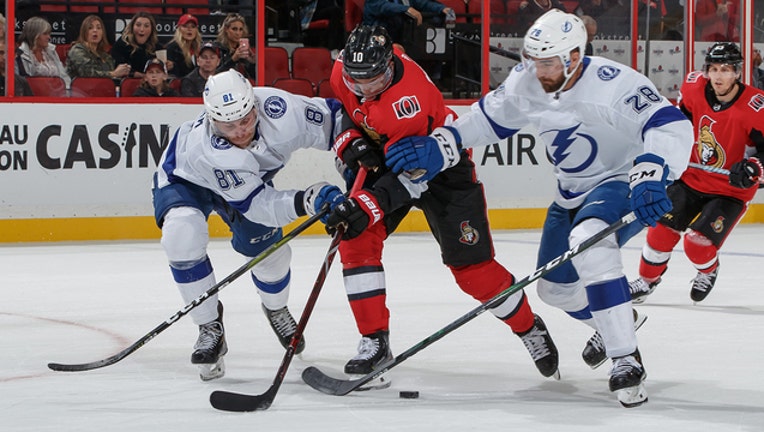 OTTAWA, Ontario - Vladislav Namestnikov got his first two goals for the Ottawa Senators, and helped them get their first win of the season.

Namestnikov scored twice late in the third period to lift the Senators to a 4-2 win over the Tampa Bay Lightning on Saturday. It also gave D.J. Smith his first career coaching win.

. "It's taken 16 years to get here as a coach," Smith said. "You didn't foresee losing the first three as a coach but it is what it is and we got a win here tonight."

Namestnikov, drafted by the Lightning in 2011, had notched only an assist in his Senators debut on Thursday after he was acquired from the New York Rangers on Monday. Against Tampa Bay, he scored the tiebreaking goal with 3:03 remaining and added an empty-netter with just seconds left.

"It feels great," Namestnikov said of the win. "Start was 0-3 but it was definitely important to get this win and (have) positive vibes and now we move forward."

The Senators outshot the reigning Presidents' Trophy winners 34-21. Tampa Bay looked sluggish at times two days after their soring outburst in a 7-3 win at Toronto.

Witkowski's wrist shot from the left circle tied it 2-2 with his first at 8:56 of the third.

Then, it looked like the Lightning took a 3-2 lead just past the midpoint of the third, but after a penalty on Matthew Tkachuk with 8:10 left made it 4-on-4, a goal by Nikita Kucherov was waved off.

Namestnikov then came through late.

"It was back and forth in the third. It didn't look good. We got a call overturned and we found a way to win," Smith said. We earned it tonight."

It was the third-straight game the Senators faced a backup goalie, as McElhinney started for the Lightning instead of reigning Vezina Trophy winner Andrei Vasilevskiy.

Mark Borowiecki nearly broke it open early for the Senators, hitting the crossbar less than a minute into the game. It was a sign of things to come in the opening period as Ottawa outshot the Lightning 12-5 over the first 20 minutes.

But the Senators - who came into the game last in the league on the power play - couldn't capitalize on any of their opportunities, including going 0 for 2 with the man advantage.

Tampa Bay served two avoidable penalties early in the second. First, the Lightning were caught for having too many men on the ice and then Erik Cernak was whistled for playing the puck with his hands.

The Senators couldn't convert on the 5-on-3 or with the man advantage, continuing their scoreless streak on the power play.

However, after Brady Tkachuk poked a bouncing puck across to Bobby Ryan as he fell to the ice, Ryan found a wide-open White who ripped a wrist shot over McElhinney's glove for his first with 6:16 left in the first.

Ottawa fans barely had enough time to sit down after they celebrated White's goal as Palat got his third of the season for the Lightning just 33 seconds later to tie the score.

With 27 seconds left in the first, Pageau scored his first of the season after chipping in a bouncing puck under Anderson's glove.

NOTES: Senators F Artem Anisimov did not return for the third period after sustaining a lower body injury. ... Tampa Bay's line of Steven Stamkos, Brayden Point, and Kucherov - who combined for five goals and 11 points in the Lightning's game against Toronto - were held scoreless.

Lightning: At Montreal on Tuesday night.

Senators: Hosts Minnesota on Monday to complete a four-game homestand.