TAMPA, Fla. - NFL Draft prospects come to winter in Tampa looking to gain an edge under the direction of Yo Murphy with House of Athletes. Murphy’s been working with football talent for 12 years and he has seen what improvements here can mean on draft day.

"For us, it's about having the opportunity to get someone they say is a second-rounder to the first (round) or somebody that is a free agent to the sixth round or someone that goes as a free agent making the team," Murphy explained.

Ohio State's Nicholas Petit-Frere has come home to Tampa. The former Berkeley Prep star is a projected first-round, round-offensive lineman. He's training with players from across the country with a common goal.

"It's kind of like a brotherhood back at Ohio State," said Petit-Frere. "Like a similar feel that we're all working together, working for one goal, one mindset to get drafted as high as possible."

Iowa defensive back Dane Belton began training with Murphy since his high school days at Jesuit. He’s projected to go between the second and fourth round. Waiting for draft day is s lifelong dream. 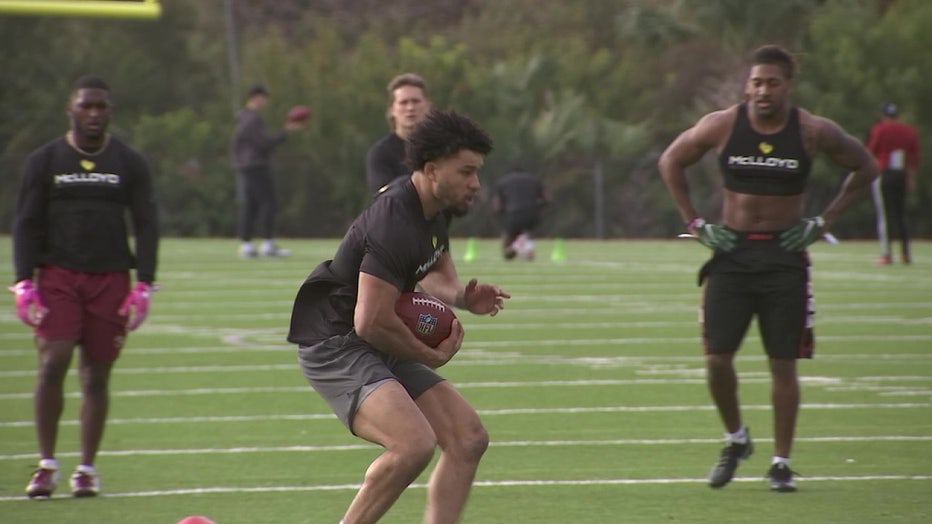 It's not only the physical measurements that weigh-in for the NFL Draft. The other half is the psychological evaluation and Yo is bringing in two guys with a wealth of NFL experience.

"Mark Dominik [former Bucs G.M.] actually comes tomorrow to go and talk with the guys," stated Murphy. "We had Derrick [Brooks] was in the other day to talk about some of the board work. It's really coaching them up with how to be a pro. It really helps them accelerate where they are at."

These guys are working hard looking for their chance at the next level.