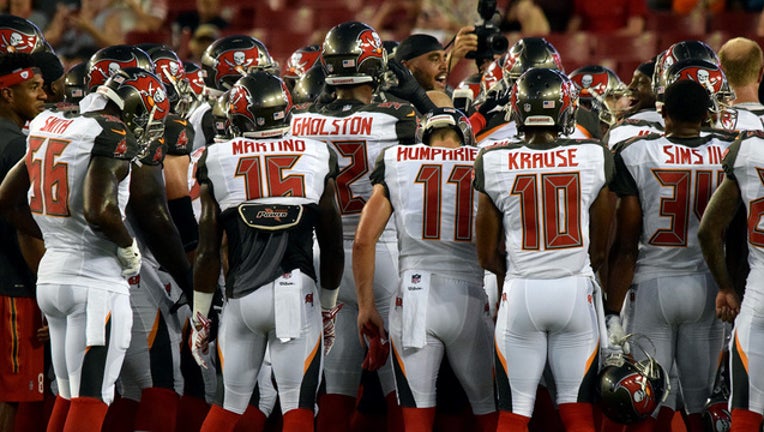 Bell was selected in the fifth round of the 2015 draft out of Nebraska, where he is the school's career receiving leader. He spent his rookie season on injured reserve and was unable separate himself from a group of candidates for a roster spot behind Mike Evans, Vincent Jackson, Adam Humphries and Russell Shepherd.

Vitale was a sixth-round draft pick this year out of Northwestern. The decision to waive him and another rookie, Kivon Cartwright, leaves the Bucs with five tight ends — starters Cameron Brate and Luke Stocker, plus Austin Seferian-Jenkins, Brandon Myers and rookie Alan Cross, one of four undrafted free agents who survived Saturday's moves.

Defensive linemen Channing Ward and DaVonte Lambert and offensive tackle Leonard Wester, from Division II Missouri Western, are the other undrafted rookies still on the team.

There were no real surprises among the other moves.

Nor was it surprising that coach Dirk Koetter kept three quarterbacks, with Mike Glennon and Ryan Griffin backing up second-year pro Jameis Winston, who took every snap as a rookie in 2015.

Glennon, entering his fourth season, has made 18 career starts. Griffin, who has yet to play in a regular season game, signed with Tampa Bay last season after spending two years with the New Orleans Saints.

The Bucs did not have any media availability Saturday, however Koetter said last week that he likely would carry three quarterbacks.

"Two reasons: one, we put a lot of time into Ryan Griffin and I think he's proving that he's capable of being a backup in this league. And then the second thing is, obviously, it's not a big secret that Mike Glennon is going into the last year of his contract," Koetter said.

"Jameis is our quarterback for the long haul, but we've got to have a two, and those guys take so long to train. ... We picked 'Griff' up at this time last year, so we've invested a full year into his training. ... He's done a good job when he's been on the field, and we think he's got a chance to be here long-term."