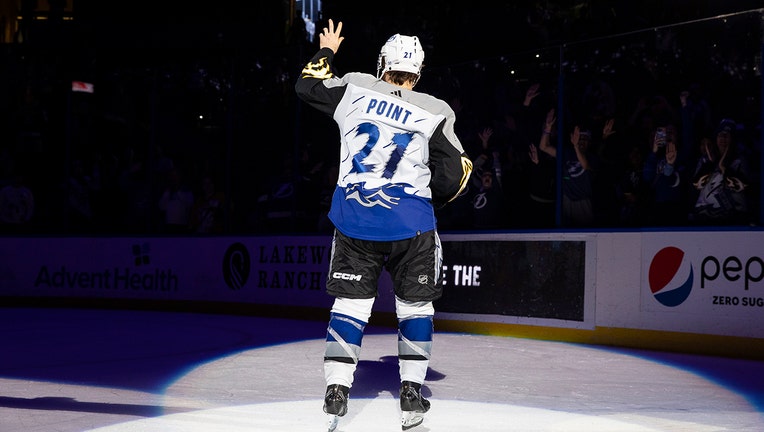 TAMPA, FL - DECEMBER 8: Brayden Point #21 of the Tampa Bay Lightning celebrates the win against the Nashville Predators at Amalie Arena on December 8, 2022 in Tampa, Florida. (Photo by Mark LoMoglio/NHLI via Getty Images)

Point made it 3-2 with his second goal of the night, converting a 2-on-1 just 2:14 into the third. It was his fourth two-goal game this season and third over his last seven outings.

Brian Elliott made 34 saves and Corey Perry also scored for the Lightning, who were coming off a 4-2 loss Tuesday to Detroit.

Nashville, which is 7-2-1 over the last 10 games, got goals from Mark Jankowski and Alexandre Carrier. Juuse Saros stopped 27 shots.

Carrier tied it 2-all on the rebound of his own shot at 12:36 of the second. It was his third goal in five games against Tampa Bay. He has two goals in 118 games against everyone else.

Point and Perry put the Lightning up 2-0 early in the first.

Point scored at 1:16 before Perry had a rebound power-play goal 1:37 later.

Perry tied Patrice Bergeron for 96th on the NHL list with 409 career goals by scoring his second in the last 21 games. He has one goal and five assists during a four-game point streak.

There was a video tribute in the first period for Predators D Ryan McDonagh, who spent the previous five seasons with Tampa Bay and helped the Lightning win two consecutive Stanley Cups before losing in last season’s final. McDonagh, traded to Nashville in a salary cap-related deal in July, didn't play Thursday after taking a shot to the cheekbone area on Dec. 2.

"It’s a bummer, no doubt," McDonagh said about sitting out. "A lot of great memories here in my time, and really thankful for my time here."

McDonagh is expected to miss two to four weeks.

Lightning: Play the fourth of a six-game homestand Saturday against Florida.