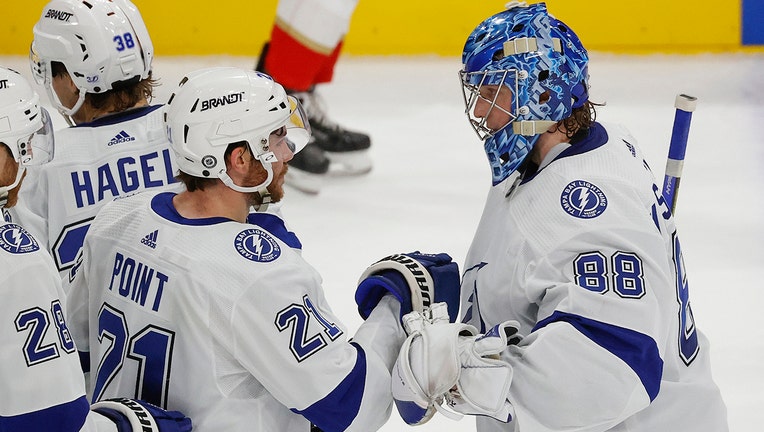 SUNRISE, FL - OCTOBER 21: Goaltender Andrei Vasilevskiy #88 and Brayden Point #21 of the Tampa Bay Lightning celebrate the overtime win against the Florida Panthers at the FLA Live Arena during an NHL game on October 21, 2022 in Sunrise, Florida. Bra

SUNRISE, Fla. - SUNRISE, Fla. (AP) — Brayden Point scored twice, including the game-winner on the power play 2:08 into overtime, and the Tampa Bay Lightning beat the Florida Panthers 3-2 on Friday night.

The Lightning won it with Florida's Matthew Tkachuk in the box for slashing and boarding 39 seconds into overtime. Victor Hedman was called for roughing which made it a 4-on-3 for the Lightning.

Florida, which was swept out of the Eastern Conference semifinals by the Lightning in May, came into the third holding a 2-1 lead. With 9:29 remaining, Point deflected Nikita Kucherov's shot past Florida goalie Sergei Bobrovsky to tie the score.

After Florida went 0 for 2 on the power play in the opening period, Tampa Bay cashed in on its first chance with the extra skater when Stamkos made it 1-0 at 13:04 of the period.

The Panthers tied the score when Tkachuk knocked in a shot from defenseman Brandon Montour just over two minutes later. Balcers scored his second in two games to give Florida the lead with 4:23 remaining in the second.

Tkachuk, in his first season with Florida following a blockbuster trade in July, now has three goals with five assists in five games with his new team.

Florida ended the night 0 for 5 on the power play as Tampa Bay scored on its first and final of seven chances.

NOTES: Tampa Bay avoided one of its worst starts in recent memory as it now has two wins in five games for four points. The worst five-game start to a season for the Lightning came in 1998 when it was 0-4 with a tie against current Florida coach Paul Maurice’s Carolina team. In 2008 and 2011, Tampa Bay started with just three points in the standings through its opening five games. … With the loss, the Panthers suffered its first October home loss since 2019 against the Colorado Avalanche. Florida was 5-0 at home in October last season and the NHL did not hold October games during the 2020-21 season. … Florida was the highest-scoring team in the NHL last season and had scored at least three goals in each of its first four games.

Veteran forward Eric Staal officially joined the Panthers on Friday as he agreed to terms on a one-year, $750,000 contract. Staal came to Florida training camp on a professional tryout (PTO), but the Panthers did not have the salary cap space to sign him to a contract. With defenseman Aaron Ekblad on long-term injured reserve, the Panthers were able to move around money to add the 37-year-old center.