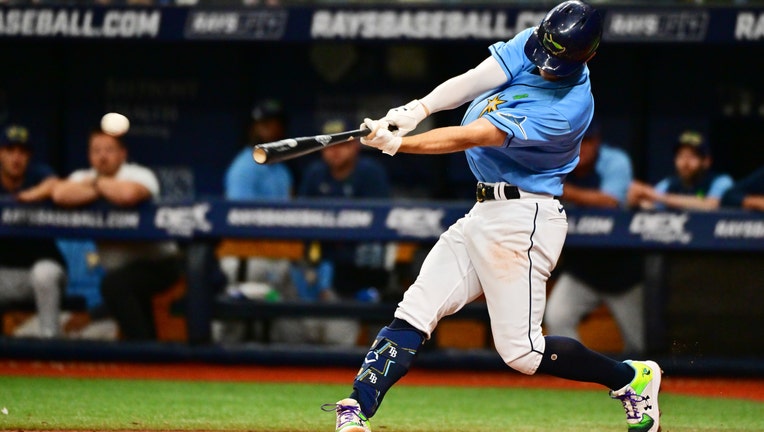 ST PETERSBURG, FLORIDA - MAY 01: Brandon Lowe #8 of the Tampa Bay Rays hits a double in the eighth inning against the Minnesota Twins at Tropicana Field on May 01, 2022 in St Petersburg, Florida. (Photo by Julio Aguilar/Getty Images)

ST. PETERSBURG, Fla. - Jorge Polanco drove in four runs with a pair of doubles, Carlos Correa had his fourth straight multi-hit game and the Minnesota Twins beat the Tampa Bay Rays 9-3 on Sunday.

The Twins broke out quickly for five runs in the first inning off Rays starter Josh Fleming and coasted to their ninth win in 10 games.

"That set the tone for everything going on," Twins manager Rocco Baldelli said. "A lot of good at-bats, a lot of good swings, a lot of using the whole field."

Josh Winder (1-0) pitched six shutout innings in his first major league start for the Twins, giving up two hits and striking out seven.

"The at-bats gave Josh a little bit of a springboard," Baldelli said.

Winder's only problems were waiting through the 28-pitch top of the first inning, and another 27 pitches in the top of the fourth.

"Thankfully the game was in Tampa and it wasn’t in the Minnesota cold, so I was kind of able to stay loose," he said. "I kind of know-how to keep my body loose and stay prepared. So if anything, it got me to settle down and kind of calm down after my bullpen. There was no real effect to that long inning. Those guys can score as much as they want."

Doubles by Polanco and Max Kepler drove in three runs in Minnesota's big first inning. Starting with a throwing error by Rays shortstop Taylor Walls, six of the first seven Minnesota batters reached base against Fleming (2-3), who needed 20 pitches to record his first out.

The left-hander gave up six runs on five hits and three walks in 3 2/3 innings, leaving after Byron Buxton's seventh homer of the season in the fourth.

"This team deserves better from me, and I believe I am better than what I’ve shown the last couple times," said Fleming, who have up seven runs — all unearned — in his last start. "I think since my first outing against the Orioles, nothing has come easy. It’s been a grind."

Robert Dugger threw 87 pitches in his major league debut for the Rays, giving up three runs on eight hits in 5 1/3 innings.

Cole Sanders pitched two innings in his debut for the Twins, giving up two runs on three hits.

Isaac Paredes, acquired from Detroit in exchange for Austin Meadows just before the season started, went 1 for 4 and played third base in his first game with Tampa Bay.

Josh Garlick, who drove in a run with a single in the first inning, left the game in the fourth with right calf tightness.

Twins: 1B Miguel Sano (knee) did not play for the fourth time in five games. ,,, RHP Sonny Gray (right hamstring strain) pitched on a rehab assignment in Fort Myers, Florida, and is hopeful of returning to the rotation. His last start was April 16.

Rays: SS Wander Franco was scratched from the lineup by right hamstring tightness. ... 1B Ji-Man Choi (loose bodies in his right elbow) was placed on the 10-day injured list, retroactive to April 28.

Twins: RHP Joe Ryan (3-1, 1.17) will pitch Monday night in the opener of a four-game series at Baltimore.

Rays: The Rays will open a nine-game road trip at Oakland on Monday night behind RHP Drew Rasmussen (1-1, 3.50).