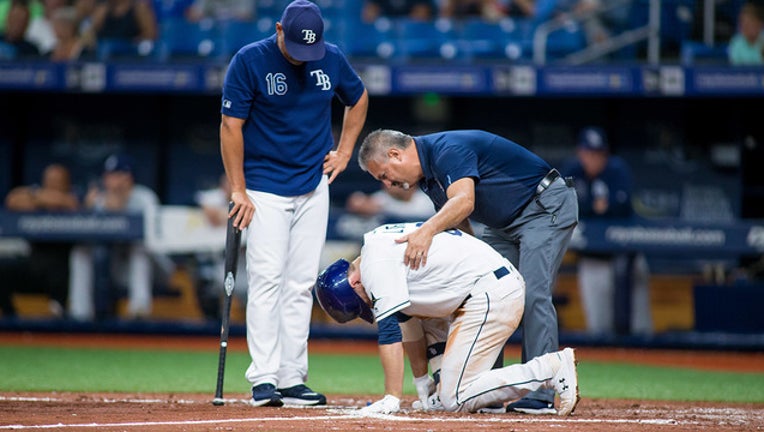 Tampa Bay Rays trainers attend to second baseman Brandon Lowe (8) after he is injured in the sixth inning of a game between the Baltimore Orioles and the Tampa Bay Rays. (Photo by Mary Holt/Icon Sportswire via Getty Images)

ST. PETERSBURG, Fla. - September is sneaking up and the playoff push is around the corner.  As the Rays look ahead, they hope to return three players making their way back from injuries: Tyler Glasnow, Brandon Lowe, and Joey Wendle.

"We've had guys go down all year -- pitching, position player-wise -- and we just kept on trucking, so it's fun to watch," said Wendle, the team's second baseman.

Wendle and Lowe are the closest to getting back to the bigs. Wendle is dealing with a sore wrist, while Lowe has been out since July with a bruised right leg when he fouled a ball off of it.

Both are in AAA Durham for rehab assignments and hope to return to the Rays in the next week or so.

"I feel really good," said Lowe. "Obviously, we're not at 100% yet, but that's a work in progress. I feel really good at the plate, good in the field, and we're just trying to keep improving and hopefully get to rejoin the team pretty soon."

Glasnow, who's been on the mend since May with a forearm strain, is slated to pitch in a rehab assignment by the end of the month. He says his chances are very high that he returns in September.

"The buildup, once he gets a couple innings in, we'll start talking about how we could see him being used on the big league staff, so he can kind of simulate that as his rehab goes," said Rays manager Kevin Cash.

The Rays currently hold the American League's second wild card spot, but just barely. If it stands, it would be the Rays' first playoff run since 2013 when they clinched a wild card spot.

"I'm tired of watching baseball on TV, ready to be there and helping the team in person," added Lowe.