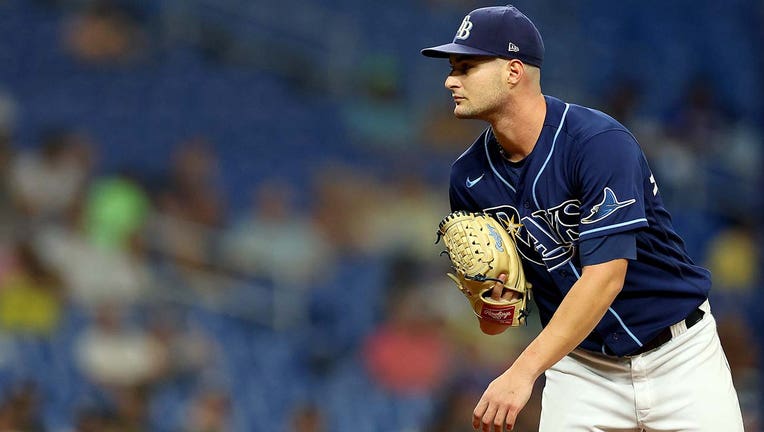 ST PETERSBURG, FLORIDA - SEPTEMBER 20: Shane McClanahan #18 of the Tampa Bay Rays pitches during a game against the Houston Astros at Tropicana Field on September 20, 2022 in St Petersburg, Florida. (Photo by Mike Ehrmann/Getty Images)

ST. PETERSBURG, Fla. - Tampa Bay Rays ace Shane McClanahan was pulled in the fifth inning with neck tightness during a 5-0 loss to the Houston Astros on Tuesday night.

The AL All-Star Game starter and Cy Young Award contender allowed five runs for only the second time this season, pushing his ERA to 2.36. McClanahan (12-6) was making his second start after returning from the 15-day injured list due to a left shoulder impingement.

McClanahan walked Jose Altuve leading off the fifth, then threw three straight balls to Jeremy Peña. Manager Kevin Cash and a trainer then came out of the dugout and pulled McClanahan, even after the 25-year-old appeared to tell Cash, "I'm good."

Peña hit a three-run homer, Altuve scored three runs and the Astros won for the ninth time in 10 games a day after clinching the AL West championship.

Altuve reached base and scored on each of his first three plate appearances, all against McClanahan. Peña's 19th homer came in the third inning after Altuve's second hit, putting the Astros up 4-0.

Kyle Tucker drove in Houston's first run with a double in the first for his 100th RBI of the season.

The Rays went into the day one game behind the Toronto Blue Jays and a half-game ahead of the Seattle Mariners in the chase for the AL's top wild card.

Houston starter Cristian Javier (10-9) gave up only one hit, a two-out single in the fifth by Christian Bethancourt. Javier won his fourth straight start, striking out six in five innings.

Ryan Pressly got the final two outs for his 29th save in 33 attempts.

A double and a single by Wander Franco were the only other hits for Tampa Bay.

Yandy Diaz doubled in the eighth as a pinch hitter for the Astros, his first major league hit.

Astros: DH Yordan Alvarez, who left Monday's game early with an apparent ankle injury after a slide into second base, was out of the lineup. Manager Dusty Baker said Alvarez's planned day off was moved up from Wednesday.

Rays: 2B Brandon Lowe took an injection for his lower back discomfort. He will re-evaluated Thursday, when he is eligible to come off the injured list.