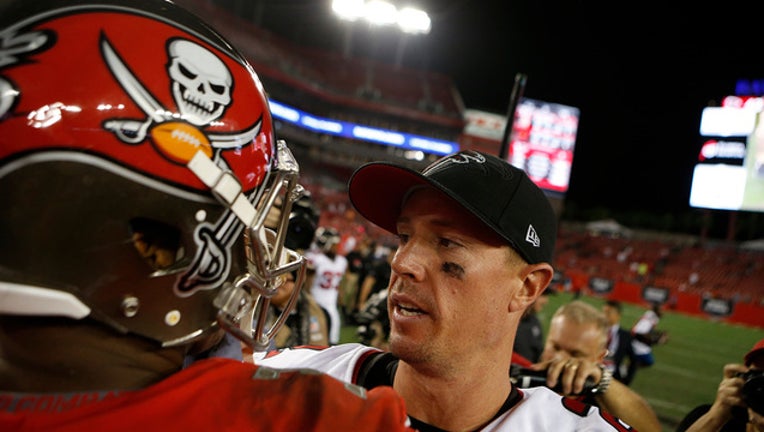 Matt Ryan of the Atlanta Falcons speaks with Jameis Winston of the Buccaneers after the game. (Photo by Brian Blanco/Getty Images)

TAMPA, Fla. (AP) - There's no letup in Matt Ryan and the Atlanta Falcons.

The NFC South leaders tightened their grip on first place in the division with a 43-28 victory over the Tampa Bay Buccaneers, with Ryan throwing for 344 yards, four touchdowns and no interceptions on Thursday night.

The victory avenged a 7-point home loss to Tampa Bay in the season opener. It also reiterated how much the Falcons (6-3) have progressed as a team since the earlier meeting.

"First game of the year, they played a little better than we did that day," Ryan said after tossing scoring passes to four different targets. "I felt like we have continued to improve from that time of year. For me, that's like the best thing from a confidence standpoint — that we continue to get better week in and week out."

Julio Jones had another big game , with eight receptions for 111 yards. In 10 career meetings against Tampa Bay, he's averaged 110.6 yards per game with eight touchdowns.

It was the receiver's fifth 100-yard game of the season, 33rd of his career.

"The amount of guys that get involved in the game is a big topic for us," Atlanta coach Dan Quinn said.

Jameis Winston threw for 261 yards and three touchdowns for the Bucs (3-5), including scoring passes of 3 and 24 yards to Mike Evans, who had 11 receptions for 150 yards.

Both of Tampa Bay's young stars finished the game on the sideline, with Evans being evaluated for a possible concussion and Winston limping off after being shaken up when he was tackled trying to score on a two-point conversion play with just under seven minutes remaining.

Winston was tackled around the ankle by Atlanta's Brooks Reed and also hit by cornerback Jalen Collins. He said he was fine and didn't leave the game because he was injured.

"Coach took me out," Winston said.

Mike Glennon finished up for the Bucs, taking his first regular season snaps since 2014. He threw a late TD pass to Cameron Brate to cut into a 23-point deficit.

Some things to know about the Falcons and Buccaneers:

MOVING FORWARD: The Falcons are positioned well in the division, but don't want to get ahead of themselves. "One of the things I do like about our team is we're able to stay on the present moment and focus on the team that is at hand. ... Our focus this week was on us and how well we could attack, so we're going to stay right in that window." Tampa Bay has lost two straight on the heels of a two-game winning streak that got them back in the division race. "We're 3-5 at the halfway point, and that's what we earned. There's half a season left. I've got to figure out a way to help this team play up to its potential because right now they're not," Bucs coach Dirk Kotter said. "And that's on me."

DEPENDABLE JONES: Jones started slowly, before the Falcons finally got him involved. The All-Pro receiver had half his production coming during a two-minute stretch of the second quarter. Early in the second half with the Falcons only leading 20-14, Jones caught passes from Matt Ryan on four consecutive plays, all for first downs, during an 86-yard touchdown drive. "His play kind of got us going," Ryan said.

THE BUCS STOP HERE: Falcons DT Grady Jarrett stopped a promising Tampa Bay drive with sacks on successive plays late in the first half. The Falcons finished with three sacks, hiking their season total to 21 in nine games. They had 19 last season, fewest in the NFL.

LYNCH HONORED: Retired S John Lynch became the ninth member of the Bucs Ring of Honor during a halftime ceremony. Lynch earned nine Pro Bowl selections during a 15-year career with Tampa Bay and the Denver Broncos. He was a captain on the Bucs' only Super Bowl championship team (2002) and ranks fifth in team history with 164 games played. Lynch was inducted into the Broncos Ring of Honor earlier this month.