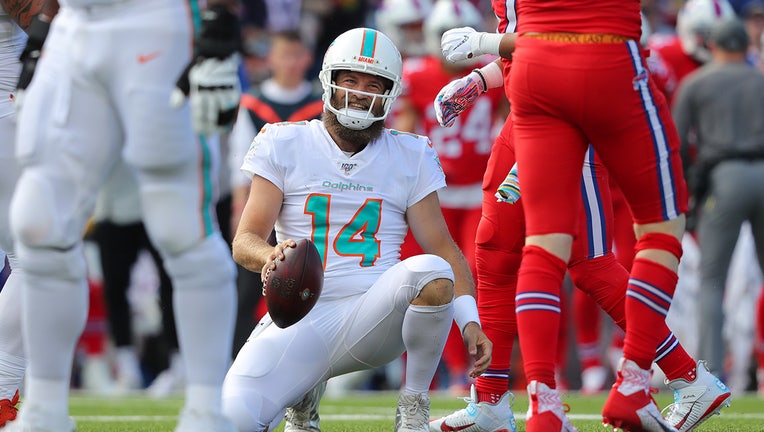 Ryan Fitzpatrick of the Miami Dolphins reacts after getting tackled on October 20, 2019 in Orchard Park, New York. (Photo by Timothy T Ludwig/Getty Images)

ORCHARD PARK, N.Y. - Ryan Fitzpatrick has news for anyone believing the Dolphins intend to bow down meekly and tank their way to a winless season and the No. 1 overall pick in next year's draft.

The 15-year journeyman is no stranger to playing for rebuilding teams and saw signs of the Dolphins improving following a 31-21 loss to the Buffalo Bills on Sunday.

"I think I'm the perfect man for this job, because I've been through it," Fitzpatrick said. "I have zero ego. All I want to do is go out there and win. I want to bring an energy."

Fitzpatrick did just that Sunday, inspiring a winless and beleaguered Miami team to its best offensive performance of the season.

The Dolphins (0-6) became the first opponent to score more than 17 points against the Bills this season. And Fitzpatrick became the first to top 250 yards against Buffalo since New England's Tom Brady did it in prime time last October.

Playing on the field where he created the "FitzMagic" buzz in 2011, Fitzpatrick went 23 of 35 passing for 282 yards and a touchdown. He ran for an 11-yard TD with 1:45 left by lowering his head and powering through Bills safety Micah Hyde at the goal line.

But as has often happened during his career, Fitzpatrick was undone by one fateful play.

With 5:07 left in the third quarter, Miami was up 14-9 and had a second-and-goal at Buffalo's 12. Fitzpatrick threw a pass toward Isaiah Ford in the right corner of the end zone only to have it intercepted by a diving Tre'Davious White.

The Bills then marched 98 yards to the go-ahead touchdown on a 20-yard pass from Josh Allen to John Brown on the third play of the fourth quarter. White then set up another touchdown after he punched the ball out of the hands of rookie receiver Preston Williams.

Though the Dolphins fell short a week after a 17-16 loss to Washington, they continued sending a message of not buying into fans scooping up "Tank For Tua" T-shirts, in reference to Alabama quarterback Tua Tagovailoa.

"He got us out of trouble a couple of times, and made some plays for us," Flores said. "We've got to continue to build and get better and finish a game."

Fitzpatrick can relate to how a team can improve.

He was part of the Bills opening 0-8 in 2010 after replacing starter Trent Edwards three games into the season before Buffalo won four of its final eight.

The same, he believes, could happen in Miami.

"I want to try to be that guy, the stable guy that they can look to when things get a little shaky," he said. "I've had a different career than a lot of quarterbacks. It's a career I've loved and a position that I like being in."

Fitzpatrick is very fond of the four years he spent with the Bills, and had to laugh in noting he made one fundamental mistake before the opening kickoff.

He walked out of the visiting locker room and turned right -- the way the Bills turn when they head out to the field -- rather than left.

For two-plus quarters, Fitzpatrick had the Dolphins pointed in the right direction.