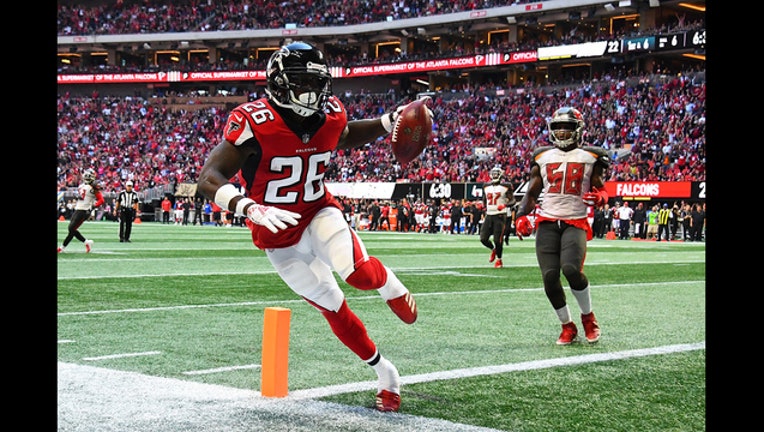 Tevin Coleman scores a touchdown during the fourth quarter against the Tampa Bay Buccaneers at Mercedes-Benz Stadium on October 14, 2018 in Atlanta, Georgia. (Photo by Scott Cunningham/Getty Images)

ATLANTA (AP) - After Matt Ryan and Jameis Winston traded touchdown pass after touchdown pass, it came down to a few wacky flips near the goal line.

The Tampa Bay Buccaneers nearly pulled off a miracle.

But, in the end, the Atlanta Falcons finally got a much-needed victory to bounce their way.

Ryan threw for 354 yards and three touchdowns as the Falcons snapped a three-game losing streak, holding off Tampa Bay 34-29 Sunday in Winston's return as the Bucs' starter.

The Falcons (2-4) scored on their first three possessions and held off a wild comeback by Tampa Bay (2-3), avoiding their first 1-5 start since 2007. The Bucs lost their third in a row.

"It was all hands on deck," Atlanta coach Dan Quinn said.

Especially on the final play .

Winston and the Bucs drove to the Atlanta 21 but were out of timeouts. With the Falcons dropping nearly everyone toward the end zone, expecting a pass, Winston took the snap and darted straight up the middle of the field. When he was about to be tackled at the 10, he pitched the ball toward receiver Adam Humphries, who was so intent on going for the winning score he couldn't hang on.

The ball skipped to Mike Evans, who blindly flung it in the direction of DeSean Jackson along the sideline at the 5. Jackson might've had a chance to dive for the end zone, but he couldn't come up with another bouncing ball. It rolled harmlessly out of bounds to end the game.

Jackson ripped off his helmet and kicked the pylon in disgust on his way to the locker room.

Winston, who was suspended for the first three games of the season and came off the bench in Week 4, threw for 395 yards and four TDs. His performance, though, was marred by a pair of interceptions, one a deep ball that was picked off at the Atlanta 1 and a deflected pass in the end zone that ricocheted high in the air and was grabbed by Brian Poole to deny a red-zone scoring chance.

Ryan's three TD passes gave him 274 in his career, passing Joe Montana for 16th on the career list.

"Obviously it's very special any time your name is brought up with Joe's," Ryan said. "But I'm more excited about the win."

He also had a big scramble on third-and-9, powering for a 13-yard gain that set up his final scoring pass.

Quinn made a gutsy call with just over a minute remaining, sending on Matt Bryant to attempt a 57-yard field goal with Atlanta clinging to a 31-29 lead.

Bryant's kick just cleared the crossbar, extending the Falcons' lead. The 43-yard-old Bryant put everything into the kick and immediately grabbed his right hamstring before hobbling off the field.

Quinn's decision forced the Bucs to go for a touchdown.

"I can't say enough about Matt Bryant and the kick he had," Quinn gushed. "He's definitely one of the most mentally tough players I've had a chance to coach."

Julio Jones went another game without a touchdown catch.

The Falcons didn't mind a bit.

Jones had 10 receptions for 143 yards - his third 100-yard game of the season - and constantly drew attention away from his teammates. That allowed Austin Hooper, Mohamed Sanu and Tevin Coleman to haul in scoring passes.

Jones has gone 11 straight regular-season games without a TD since a Nov. 26, 2017, victory over Tampa Bay, when he had two scoring catches.

The beleaguered Tampa Bay defense, which is guided by former Falcons coach Mike Smith, was shredded in the first half for three touchdowns, a last-second field goal and 275 yards.

It showed a bit of improvement after the break, actually forcing Atlanta to punt on three straight possessions.

But, with the game on the line, the Bucs surrendered a 75-yard drive capped by Ryan's 6-yard TD pass to Coleman and a 36-yard possession that set up Bryant's long field goal.

Tampa Bay came into the game allowing 34.75 points per game, more than any team in the league.

Atlanta's receiving corps took a beating. Calvin Ridley, who was leading the Falcons with six touchdown catches, went out in the first half with an ankle injury and didn't return. Sanu was sidelined in the second half with a hip problem after hauling in a 35-yard touchdown pass.

The loss of two receivers forced the Falcons to give more playing time to Justin Hardy, Marvin Hall and Russell Gage. Hardy had three catches and Gage came up with a big catch on Atlanta's touchdown drive in the fourth quarter.

The Bucs lost defensive tackle Gerald McCoy, who walked slowly off the field in the fourth quarter with an undisclosed injury. Also, cornerback Ryan Smith was evaluated for a possible concussion.

Buccaneers: Return home next Sunday to host the Cleveland Browns (2-3-1).

Falcons: Host the struggling New York Giants (1-5) on Monday, Oct. 22, to close out a stretch of five home games in the first seven weeks of the season.