TAMPA, Fla. - Caden McDonald is leading the Sickles High Gryphons with his natural baseball talent that could make him Tampa Bay’s next Major League prospect.

McDonald leads the state of Florida with an eye-popping .730 batting average, which puts him in the top 10 in the country.

"I don't think anyone of us expected anyone to hit over .700 this season," said Sickles head coach Eric Luksis. "He's got a gift. The ball comes off his bat a little different than anybody else that we have. He's big. He's physical. He's strong."

"You know when you're seeing the ball well, it just amplifies sometimes," said McDonald. "It's been going on for a few games now. We're about halfway through the season."

Caden has the talent to be a first round draft pick, but the thing is, he’s just junior and is a starter for the first time this season. While playing Major League Baseball has been his dream since his days in t-ball. He’s not looking for it to be his next step. 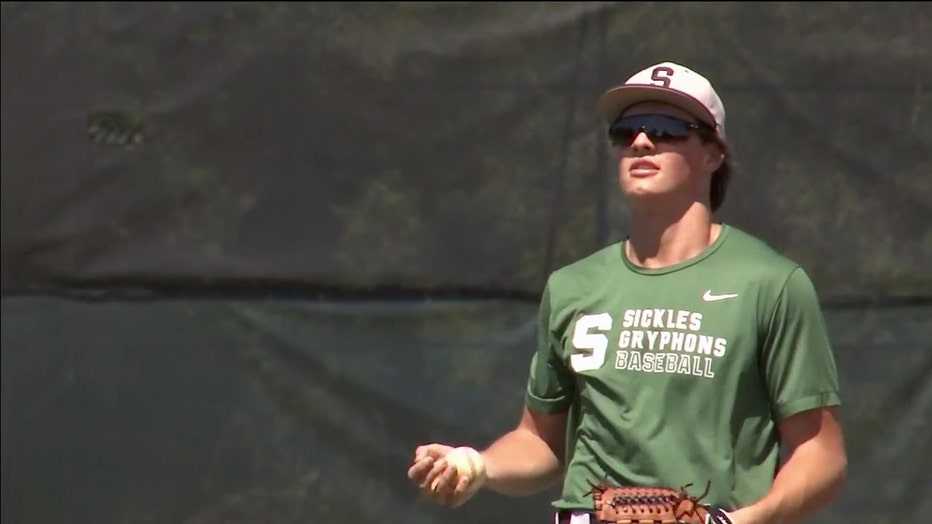 "Definitely college ball," said McDonald, who has a weighted 5.68 GPA and scored 1420 on the SAT. "Try to get my education in college and try to do something good there. Then hopefully get drafted and make it to the Major Leagues."

Caden has shown power at the plate that ranks him among the best hitters in the nation, but he's been very successful on the mound as well. Undefeated as a starting pitcher, he's a dual threat that would like to continue as a 2-way player after he graduates Sickles in 2024.

"When you're doing good at both it makes it for a lot more fun," said McDonald. "Both are enjoyable. I'm just trying to see how far each one of them goes. I love doing them both."

Beating Jesuit twice as the Gryphons starting pitcher in the last six months has made Caden one to watch.

"To watch his outing in the Saladino Tournament where we won 1-nothing he also brought in the RBI single it was just a great outing," said Luksis. "When you beat those guys you have to basically play perfect."