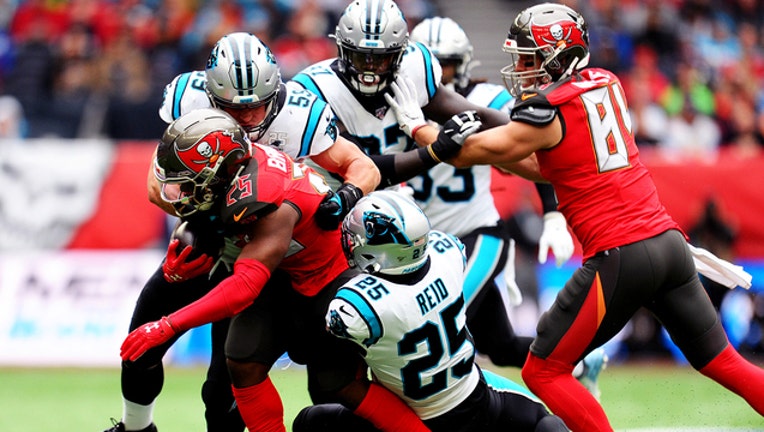 LONDON - Jameis Winston started the day with an interception on Tampa Bay's first play from scrimmage. He ended it staring into space following his sixth giveaway of the day.

A 400-yard passing day and his 100th career TD pass were overshadowed by the kind of sloppy performance from the No. 1 overall pick in the 2015 draft that has become all too commonplace in his five seasons in Tampa Bay.

Winston committed six of Tampa Bay's seven turnovers on the day and the Buccaneers had another rough stay in London, losing 37-26 to the Carolina Panthers on Sunday.

Winton failed to do that on a day when he was under heavy pressure behind a makeshift offensive line that had backups Josh Wells and Earl Watford starting on the right side. He was sacked seven times, hit on two of his career-worst five interceptions, and lost the ball on one of his two strip-sacks on back-to-back plays.

But the tone was set on the opening snap when Winston tried to fit in a pass to Mike Evans only to see James Bradberry step in for the interception that set up a field goal for Carolina.

"One play can't be the outcome of the whole game," Winston said. "I have to do a better job of snap and clearing and playing better."

But he was unable to do that even after the Bucs got back into the game with a touchdown run by Ronald Jones II in the second quarter following a Carolina turnover.

Winston then was hit on an interception on Tampa Bay's next drive, setting up a Panthers touchdown that made it 17-7 and the deficit never got into single digits the rest of the way. Then with Tampa Bay driving late in the first half, Winston was strip-sacked on successive plays when he held onto the ball too long, leading to yet another turnover.

"Throw the damn ball away," coach Bruce Arians said. "He has a habit of trying to be Superman. That's been a problem in the past. The fumbles haven't occurred this year until today. But again, trying to make something out of nothing. It's just a matter of knowing when to quit on a play."

An interception in the third quarter set up another Panthers touchdown that made it 27-7 and the Bucs were unable to overcome that.

Winston started putting up some big numbers late with a pair of TD drives in the fourth quarter and finished with his second career 400-yard game, along with TD pass No. 100 to Cameron Brate.

But he also threw two more interceptions on the final two drives, giving him six giveaways for the game and an NFL-worst 86 since entering the league in 2015. He has five games with at least four turnovers while no other player in that span has more than two.

"I see the preparation, I see what he's trying to do," Arians said. "The fumbles, we have to get rid of those. We have to start throwing balls away. And we don't have to take those sacks, you don't take those hits either. The interceptions, I have to go back and look at the film where the ball was going and how it got there. I know that on one his arm was hit, the last one was just a prayer."

Winston's struggles weren't the only problems for the Bucs, who fell to 0-3 all-time in London. Bobo Wilson muffed two punts, losing one of them, for Tampa Bay's other turnover.

The defense got burned by Christian McCaffrey on a dazzling 25-yard touchdown catch and run and Carolina drove 99 yards for another score in the first half to take a 10-0 lead.

"We put ourselves in tough positions," defensive lineman Ndamukomng Suh said. "From a defensive perspective, we've got to get off the field no matter what situation we are in. We didn't hold up our end of the bargain."