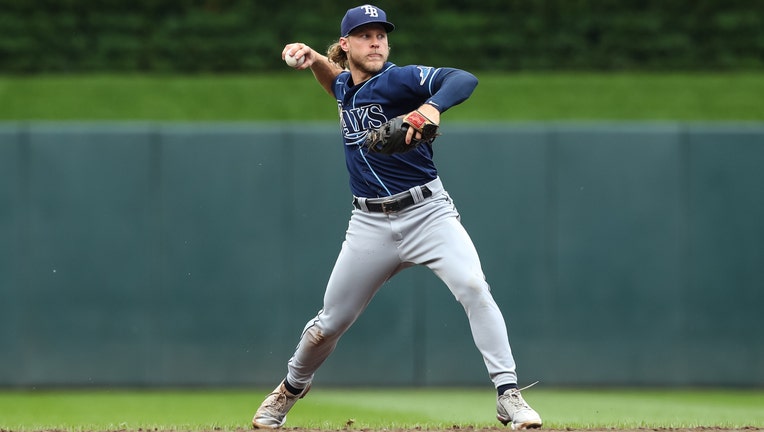 MINNEAPOLIS, MN - JUNE 12: Taylor Walls #6 of the Tampa Bay Rays throws the ball to first base to get out Gilberto Celestino #67 of the Minnesota Twins in the second inning of the game at Target Field on June 12, 2022 in Minneapolis, Minnesota. (Phot

Springs (3-2) continued his impressive transition to the starting rotation. He struck out five and walked two in 5 1/3 innings against a Twins team that had scored a combined 15 runs in winning the first two games of the series.

Arozarena was hit by a pair of pitches twice and visibly upset with Minnesota starter Cole Sands. Arozarena then stole two bases and added an RBI double.

The Twins had opened a six-game homestand by sending the New York Yankees' Jameson Taillon, Nestor Cortes and Gerrit Cole each to season highs in runs allowed and then did the same Friday against Rays right-hander Drew Rasmussen.

Minnesota followed with five runs in 2 1/3 against Shane Baz, Tampa Bay’s top pitching prospect, on Saturday in his 2022 debut. The Twins scored 57 runs in their previous eight games.

Springs, making his eighth start this season, kept the Twins off-balance throughout. No runner even reached second base, but a walk to Carlos Correa with one out in the sixth ended Springs’ day with a career-high 94 pitches.

The left-hander is now 2-2 as a starter this season and has given up eight runs in 39 1/3 innings for a 1.85 ERA. Springs has made 108 relief appearances in his five-year career.

MAN OF HIS WORD

Tampa Bay outfielder Brett Phillips walked into the Rays clubhouse Sunday clean-shaven. He shaved after getting a hit Saturday to snap a stretch of 31 hitless at-bats.

Phillips told a reporter that he was a "man of my word," and he hasn’t been clean-shaven since August 2019 when he was a minor leaguer with the Kansas City Royals.

Veteran reliever Tyler Thornburg threw 2 1/3 scoreless innings in his Minnesota debut after having his contract selected on Sunday from Triple-A St. Paul. Thornburg, 33, had pitched in two games for St. Paul after pitching in nine games for the Atlanta Braves earlier this season with a 3.86 ERA.

Chi Chi González was designated for release or assignment. He started Saturday’s game and allowed three runs in four innings.

Rays: SS Wander Franco (right quadriceps strain) will begin agility drills on Monday. Franco has been out since May 30. … 2B Brandon Lowe (stress reaction in low back) advanced to hitting flips from a coach. … RHP Luis Patiño (left oblique strain) threw two innings and 29 pitches for Tampa Bay’s team in the Florida Complex League on Saturday. His rehab assignment will now move to Triple-A Durham.

Twins: Nick Gordon was checked by medical staff before the game after leaving Saturday’s game with a hamstring injury. Gordon entered the game as a defensive replacement in the eighth.

Rays: The nine-game road trip continues Tuesday in New York with RHP Corey Kluber (3-2. 3.88 ERA) scheduled to pitch against the Yankees. Kluber allowed one run in six innings against New York on May 28. The Yankees are scheduled to start RHP Gerrit Cole (5-1, 3.63).

Twins: RHP Chris Archer (1-2, 3.65) will start the first of three games in Seattle on Monday. The Mariners have RHP Chris Flexen (2-7, 4.35) lined up to start. Archer earned his first Twins win in his last start with five innings and one run allowed against the Yankees.