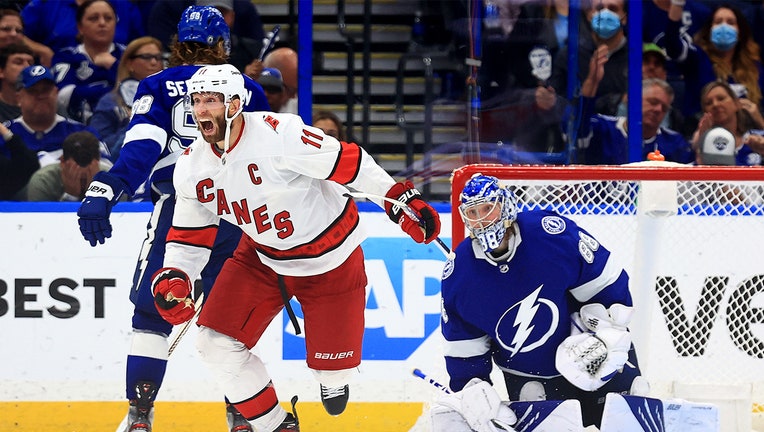 TAMPA, FLORIDA - JUNE 03: Jordan Staal #11 of the Carolina Hurricanes celebrates an overtime power play goal during Game Three of the Second Round of the 2021 Stanley Cup Playoffs against the Tampa Bay Lightning at Amalie Arena on June 03, 2021 in Ta

TAMPA, Fla. - Jordan Staal scored on a power play at 5:57 of overtime to give the Carolina Hurricanes a 3-2 victory over the Tampa Bay Lightning on Thursday night in Game 3 of the second-round series.

"He was good," Brind’Amour said. "Did I expect him to be like that? I didn’t really know what to expect, to be honest with you, he’d been out for so long. But he’s a battler.’’

"Feels great obviously, but at the same time, it was only our first win in the series," said Aho, who finished with three points. "We just have to keep going to Game 4 and just do it over and over again and trust our system. But it obviously feels good to win.’’

Brayden Point and Alex Killorn had power-play goals for Tampa Bay, which outshot the Hurricanes 37-27.

"We did everything we wanted to do tonight except score one more goal than they did," Lightning coach Jon Cooper said. "A lot of the things we put in place the players implemented and I thought they did a hell of a job. We just came up one short.’’

The Hurricanes did something they were unable to do in the opening two games on home ice — score first.

The first lead of the series for the Hurricanes came courtesy of Pesce, who one-timed a shot from above the right circle off a feed from Andrei Svechnikov at 5:15 of the second period. It’s the first time Carolina opened the scoring since Game 2 against the Nashville Predators in the opening round and the first lead for the Hurricanes since Game 4.

It also was the first 5-on-5 goal scored by Carolina in the series and the first one Tampa Bay had allowed since the second period of Game 5 against the Florida Panthers.

The Hurricanes built the lead on a well-executed set play as Jaccob Slavin sent a pass from inside his own zone up ice to Svechnikov, who one-touched a pass to a streaking Aho. The play sent Aho in alone for a breakaway to give Carolina a 2-0 lead at 7:40.

It didn’t take long for Tampa Bay to respond on a power play. At 8:57, a passing play from Steven Stamkos to Kucherov to Point cut the lead to 2-1.

The Tampa Bay power play went back to work again when Brady Skjei was whistled for hooking at 15:52 and again cashed in. Point gained the zone with speed and found Kucherov in the slot. After his initial chance was blocked, he recovered the puck and fed Killorn between the hashmarks for a quick-rising sot over Marazek at 16:18, the 11th power-play goal scored by Tampa Bay in nine postseason games.

"That was a huge momentum shift for us in the game, being down 2-0 and getting two power-play goals," Lightning defenseman Victor Hedman said.

Tampa Bay defenseman David Savard missed his third consecutive game with an undisclosed upper-body injury. Though Savard practiced with the team Monday and coach Jon Cooper indicated Savard is expected to return in the series, he did not take part in the team’s morning pregame skate.

NO GO FOR TRO

Carolina center Vincent Trocheck missed the game and his status for the remainder of the serious is unknown. Trocheck left late in the second period of Game 2 after colliding with teammate Warren Foegle and had to hop off the ice. Trocheck tried to return but took just one shift. Brind’Amour indicated Thursday morning that Trocheck was doubtful but wanted to give it a try but the Hurricanes’ second-leading scorer during the regular season did not dress for pregame warmup.

Already without Nino Niederreiter, the Hurricanes also lost forward Warren Foegle to an upper-body injury in the second period after he collided with Tampa Bay defenseman Erik Cernak. Foegle left the ice favoring his shoulder, came out for the third period, took two shifts, and left the game.

Carolina rookie goaltender Alex Nedeljkovic was named Thursday as one of three finalists for the Calder Trophy as Rookie of the Year, along with Minnesota forward Kiril Kaprizov and Dallas forward Jason Robertson.