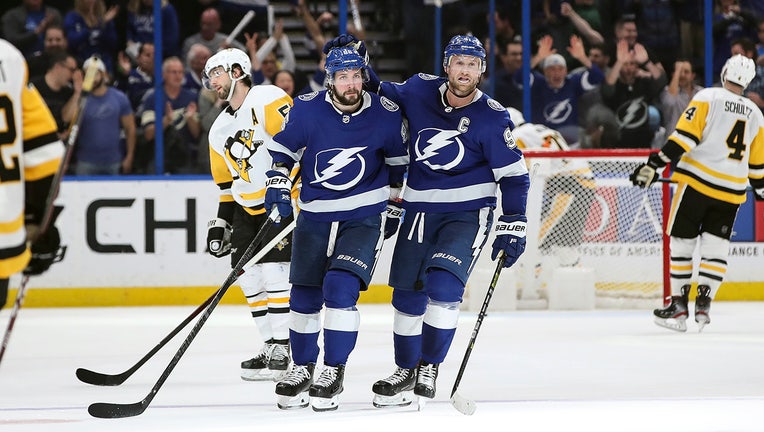 Vasilevskiy improved to 15-0-2 in his past 17 starts to set a franchise record for consecutive games without a regulation loss.

"Some of those saves he makes are ridiculous," said defenseman Victor Hedman, who finished with three assists. "Sometimes you don't expect to see those out of him but at the same time you are not surprised. He's never out of a play, and so quick. He's just unbelievable."

Mikhail Sergachev and Anthony Cirelli also scored for Tampa Bay, which has won 18 of its past 21 games. Stamkos and Kucherov each got their 25th goals of the season, with Kucherov scoring an empty-netter.

The Penguins had 1:34 of a 5-on-3 power play in the third period but failed to find the tying goal.

"I think they're important times in games," Pittsburgh captain Sidney Crosby said. "I think we've got to make time that when we get an opportunity like that and time like that we need to settle down and make some plays."

Sergachev put Tampa Bay up 1-0 with a wrist shot from the right circle that deflected off the stick of Pittsburgh's Sam Lafferty and bounced down and through Murray's legs at 9:04 of the first period.

Stamkos made it 2-0 at 12:55 after Kucherov's backcheck sprung a 2-on-1 chance the other way with Point and Stamkos playing give-and-go before Stamkos lifted a shot over Murray. Both Stamkos and Kucherov extended their respective points streaks to nine games.

Malkin cut the deficit in half at 9:25 of the second period after Patric Hornqvist's centering feed hit him in the knee and bounced in.

Cirelli answered 32 seconds later with a hard wrist shot from the left circle that beat Murray to the near post.

"Turning point in that period was Cirelli scores right after they score, less than a minute," Lightning coach Jon Cooper said. "So now there is a little margin for error."

Marino cut the lead to 3-2 during 4-on-4 play with a quick wrist shot from the right circle after taking a feed from Malkin behind the net.

NOTES: Tampa Bay D Jan Rutta is expected to miss several weeks with an undisclosed lower-body injury suffered on Tuesday against Vegas. ... Tampa Bay D Ryan McDonagh left the game with a lower-body injury in the second period and did not return. ... Lightning D Braydon Coburn returned to the lineup for the first time since Jan. 14. ... Penguins coach Mike Sullivan said injured F Dominik Kahun, who missed his fourth consecutive game with a concussion, skated on his own back in Pittsburgh and is "making progress." F Nick Bjugstad (lower body) and D Brian Dumoulin (lower body) continue to do work off the ice. ... Kucherov appeared in his 500th career game.