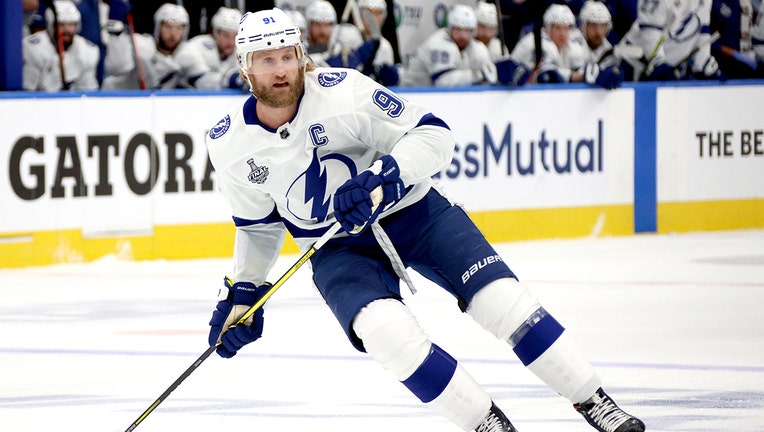 Steven Stamkos skates in the first period of Game Three of the NHL Stanley Cup Final between the Tampa Bay Lightning and the Dallas Stars. ( Dave Sandford/NHLI via Getty Images)

EDMONTON, Alberta - Steven Stamkos scored on his first shot since February, left with injury and the Tampa Bay Lightning kept dominating without him, blowing the Dallas Stars out of an empty arena with a 5-2 rout in Game 3 of the Stanley Cup Final on Wednesday night to take the lead in the series.

Even though he only skated five shifts for 2:47, the Lightning captain making his 2020 playoff debut 211 days after he last played in an NHL game gave the Lightning a jolt. He made the most of that time with a vintage Stamkos goal going around Esa Lindell and sniping a shot past Anton Khudobin.

“We were really excited,” forward Alex Killorn said. “He told us he was ready, he comes out, gets a shot on net and scores a goal. It really elevated our team. So happy for him to be back and be a part of this.”

Stamkos skated off gingerly at the end of his final shift in the first period and was not on the bench for the start of the second. He returned to the bench and took a few twirls to test out the injury but did not return.

The Lightning were just fine with Stamkos offering moral support sitting in the middle of the bench.

They got goals from all three of their first-line forwards, their top defenseman and their captain and big saves from their Vezina Trophy finalist goaltender, while the Stars' best players were quiet once again or made big mistakes to contribute to the loss. Nikita Kucherov, Stamkos, Victor Hedman, Brayden Point and Ondrej Palat all scored for Tampa Bay, which was the better team from the start of the second period on. 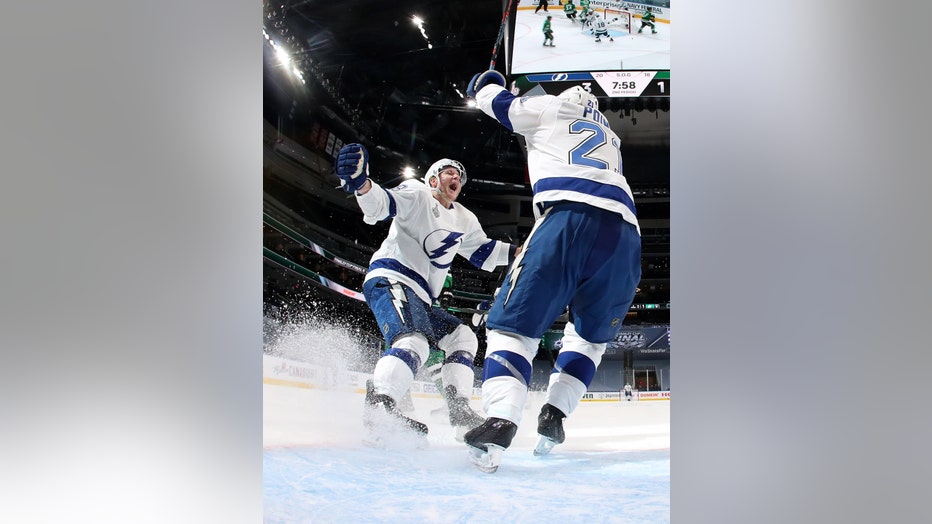 Brayden Point and Ondrej Palat celebrate after Point scored against goaltender Anton Khudobin #35 of the Dallas Stars in the second period of Game Three of the NHL Stanley Cup Final. (Dave Sandford/NHLI via Getty Images)

Khudobin was under pressure most of the night and allowed five goals on 29 shots before coach Rick Bowness replaced him at the start of the third with rookie Jake Oettinger. At the other end, Andrei Vasilevskiy made a few big saves among his 31, including a brilliant left pad stop on Corey Perry early in the game.

The game was everything that has made Tampa Bay one of the best teams in hockey for more than half of the last decade. That included the return of Stamkos, the Lightning's leader who has been forced to watch while rehabbing a core muscle injury.

“He's a threat, so he's just another thing for a team to think about when he's out there," coach Jon Cooper said Wednesday morning. “Whether that's on the power play or 5-on-5, you get another player that the puck gets on his stick in the offensive zone, it might go in the net — especially in a series where goals are at a premium.”

Stamkos, who last played Feb. 25, had surgery in early March and aggravated the injury at least once over the summer, showed that on his goal. As soon as teammates saw Stamkos scored, the bench into a spontaneous celebration perhaps unlike any goal during the playoffs.

But goals were not at a premium for the Lightning on Wednesday night. Minutes after Hedman prevented a breakaway goal by speedy Stars forward Denis Gurianov, Kucherov took advantage of a brutal turnover by 21-year-old budding star Miro Heiskanen and scored on a breakaway of his own.

Hedman scored his own goal in the second, his 10th to put him third all-time in goals by defenseman during a single postseason. Only Paul Coffey and Brian Leetch have more.

Meanwhile, Dallas' stars were not close to being their best players. Beyond Heiskanen's turnover, top-line winger Alexander Radulov took two bad penalties and was demoted in the lineup, while Tyler Seguin's goal drought reached a career-worst 12 games and Khuodbin was shaky.

Fourth-liner Jason Dickinson scored the Stars' only goal before the game was out of hand, and Heiskanen's in the third period didn't make up for putting the puck right on Kucherov's stick for the breakaway.

While Tampa Bay got a significant talent back, Dallas was without a key veteran role player. Forward Blake Comeau was ruled unfit to play after appearing to injure his right shoulder on a hit by Ryan McDonagh in Game 2.

Nick Caamano made his NHL playoff debut in Comeau’s place. He also last played — in the minors — 196 days ago.

Game 4 is Friday night with Game 5 on a back to back Saturday night.