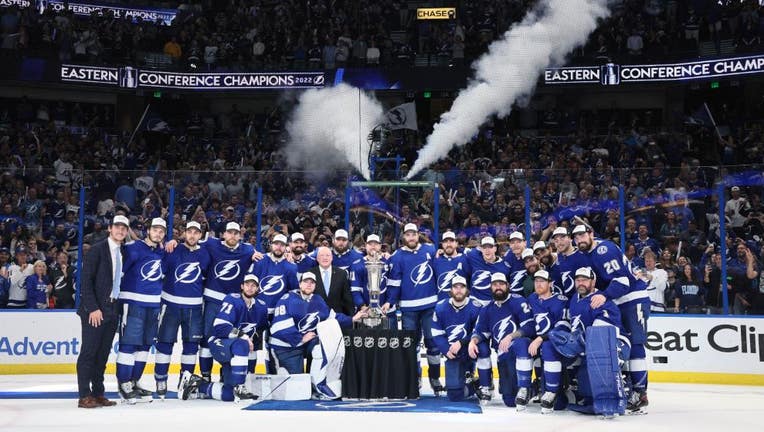 TAMPA, Fla. - The Tampa Bay Lightning's bid for a three-peat is alive and well.

With captain Steven Stamkos leading the way, the two-time defending champions beat the New York Rangers 2-1 in Game 6 of the Eastern Conference final Saturday night, securing a berth in the Stanley Cup Final for the third straight year.

"It's going to be tough to get out of the moment and look back and realize what a special group we have here because there’s still some games to be played," Stamkos said. "You’re still not at the end of our goal, but in saying that this group is pretty amazing and pretty special."

Stamkos scored two goals and Andrei Vasilevskiy had 20 saves for the Lightning, who won the series 4-2 — winning four straight games after losing the first two on the road — and will face the Colorado Avalanche in the Cup final.

Game 1 is Wednesday night in Denver.

"It’s probably not the greatest word to use, but I’m damn impressed by this group," coach Jon Cooper said.

"It’s impressive what they’ve done. ... I’m just utterly impressed by what they do to win a hockey game," he added. "And the fact that they they have every excuse in the world to not win because nobody would fault them by saying hey, you won one, you won two and to come back and and go for a third. I’m impressed."

Nikita Kucherov and Ondrej Palat assisted on the winner with 6 1/2 minutes left, with

Stamkos also scored on a

"I obviously was a little disappointed in myself for taking the penalty. ... It’s easy to say now, but for some reason I wasn’t as rattled as I usually am in those situations," Stamkos said. "I was just confident in our group that we would find a way, whether it was in regulation or was in overtime. We deserved to win the game. That was the feeling we had from puck drop."

The Lightning are the first team to make three consecutive appearances in the Cup final since Edmonton did it from 1983-85. They are trying to become the first to win three straight championships since the New York Islanders claimed four in a row from 1980-83.

The Rangers, down 3-2 in a series for the third straight round, were 5-0 in elimination games this postseason before Saturday night.

The only teams to win more elimination games in a single postseason were the 1975 New York Islanders (eight), 2014 Los Angeles Kings (seven) and 2003 Minnesota Wild (six).

"It’s hard right now. But we played well, we battled hard, we had a chance to win all those games," Rangers coach Gerard Gallant said. "They found a way to get the big goal at the big time."

New York dropped three of the first four games before winning three straight elimination games to beat the Pittsburgh Penguins in the opening round. It lost the first two on the road at Carolina before rebounding to oust the Hurricanes in seven games to reach the East final.

It was a different story Saturday night, with the Lightning limiting New York’s scoring opportunities while outshooting the Rangers 31-21.

Vasilevskiy went long stretches without being tested. He faced just seven shots in the opening period, six in the second and eight in the third.

Shesterkin, meanwhile, stopped 29 of 31 shots and made big save after big save to give New York a chance.

"Shesterkin was unbelievable. He made some unbelievable saves to keep them in it, but I think I just felt kind of a calming presence because of the group," Stamkos said. "It was just one of those nights where whether it was the next shift after, whether I scored or someone else scored, it was just a feeling that we were going to get it done."

NOTES: The Lightning played again without forward Brayden Point, who’s missed 10 games since suffering a lower-body injury during Tampa Bay’s Game 7 victory over Toronto in the first round. He was the NHL’s leading goal scorer the previous two postseasons. ... Lightning defenseman Victor Hedman exited in the second period after appearing to be elbowed in the head by New York’s Alexis Lafreniere. He returned at the start of the third period.