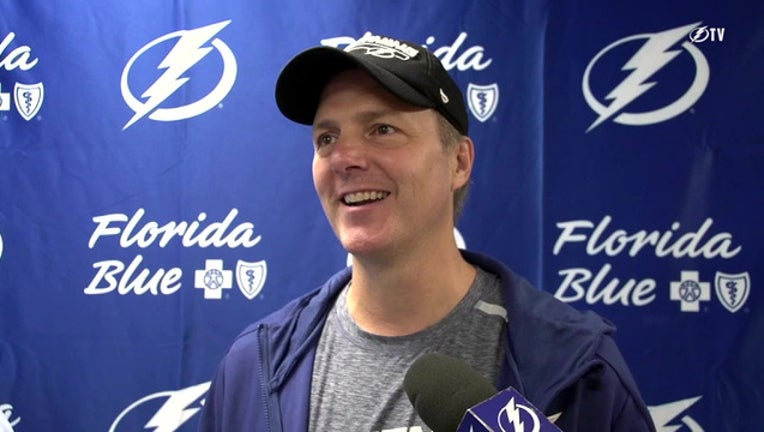 TAMPA, Fla. (AP) - The Tampa Bay Lightning know there are no shortcuts to winning a Stanley Cup title. Three deep playoff runs over the past four seasons ended in disappointment that lingers in the minds of the defending Atlantic Division champions, who understand it takes a lot more than an abundance of talent to be successful.

"It's always in the back of your head for sure. Every year you make it to the playoffs and don't win it all, there are some empty feelings. But there is nothing you can really do about it now, there's no point in dwelling on it. You learn from it and move on," captain Steven Stamkos said.

"You have to come into camp every year with the belief that this is the year you are going to win," the five-time All-Star added. "So you don't want to overlook anything or expect anything because of what you have done in the past, but expect this group to have a really good camp and start the season on the right foot."

With the exception of the unexpected resignation of general manager Steve Yzerman heading into training camp, little has changed about Tampa Bay, which focused on keeping its skilled roster intact after finishing with the best record in Eastern Conference last season.

Young goaltender Andrei Vasilevskiy led the league in wins and was a first-time All-Star and Vezina Trophy finalist, Stamkos is still playing at a high level entering his 11th season, and Victor Hedman is coming off winning the Norris Trophy as the NHL's top defenseman.

"The closer you get the more hungry you get," forward Alex Killorn said. "We've had a couple of years where we have got close, one game away from getting to the Final, so if anything I think that makes you more hungry."

Since reaching the Stanley Cup final in 2015, when Tampa Bay fell to the Chicago Blackhawks, the Lightning have lost Game 7 of the Eastern Conference final twice in three years, including coming up short against the Washington Capitals last season.

"It's a hard thing to do, and this group has done it year after year. Call it unfinished business, but you don't know how long it's going to last. But you have to keep trusting the process," coach Jon Cooper said.

"Look no further than the Washington Capitals, who went through setback after setback after setback, and now a lot of those guys that went through those years got to realize their dream and we're no different," Cooper added. "Our setbacks happened later in the playoffs, but we didn't get where we wanted to go. We've got a good group here. I can look in their eyes. They are ready to go."

Some things to know about the Lightning:

Veteran right winger Ryan Callahan, rehabbing from offseason surgery on his right shoulder, feels he's on track to return early in the season.

"I'm not going to throw out a target date. They said a five-month recovery - that's Nov. 1," Callahan said. "Obviously, we're still a little ways away from that. So, it's hard to say if I'm exactly on that, ahead of it or behind it. But I'm where I should be at this point."

Yzerman's decision to step down caught many by surprise. He will remain with the organization as a special advisor and has been replaced by former assistant general manager Julian BriseBois.

"He's done a great job in building this team and getting us to where we are now," Killorn said. "It was shocking news for all of us, none of us saw it coming, but it doesn't change anything we do."

Stamkos rejects the notion that the Lightning's window of opportunity to win the franchise's second Stanley Cup is closing, reiterating he's confident Yzerman has built the roster for long-term success.

"For sure, it's going to be open for a while if you look at what Steve was able to do this past summer in being able to lock up key pieces for a long time," the captain said. "So if you look at the nucleus of this team, pretty much everybody is locked up to long-term deals. You look at the age of a lot of the players still in their prime and some not even in their prime. The window is still going to be there to make it happen."