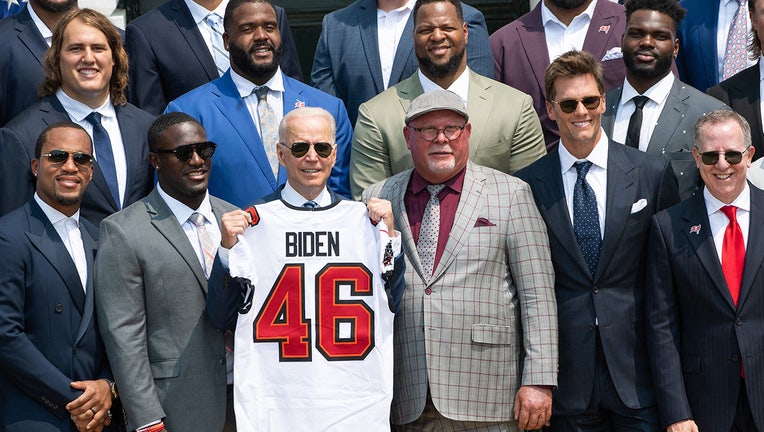 WASHINGTON D.C. - Training camp is just days away, but before that, the reigning Super Bowl champions stopped by the White House on Tuesday morning.

President Joe Biden welcomed the Tampa Bay Buccaneers a few months after the team made history in February as the first to win a Super Bowl at their home stadium and after the Bolts won their back-to-back Stanley Cup championship.

"We're making a case to start calling Tampa the ‘city of champions,’" the president said.

Biden was accompanied by Tom Brady and head coach Bruce Arians when he made his entrance for the morning press conference, noting they were the oldest quarterback and head coach to lead their team to a Super Bowl win.

"There's nothing wrong with being the oldest guy to make it to the mountaintop," he said, adding that Brady has another 20 years to go.

Arians described the team players as "outstanding," saying they took care of each other during the pandemic.

"We had to beat the virus first, and you sacrificed more than any other team I've been around…to make sure you had our team on the field every Sunday," he said. "I can't say enough about our owners, the Glazer family. They are the best owners I've ever been around."

"One team. One cause. I hope the Senate and House start helping you," Arians added while looking at Biden. "Thank you, Mr. President. Go Bucs."

Brady said the season was challenging, but it gave the team a chance to bond.

"We put our individual agendas aside and we came together as a team. Sports has an amazing way of bringing people together," he said. "It didn't look great at one point, we were 7-5, struggling there a little bit…but we found our rhythm."

"You understand that, Mr. President?" Brady said while his teammates laughed.

"I understand that," the president said, joining in on the laughs.

The Buccaneers' quarterback gets some laughs from the president during the team's trip to the White House.

The GOAT had more jokes though and tried to defend himself when he forgot which down it was against the Chicago Bears last season.

"I lost track of one down in 21 years of playing," Brady said. "And they started calling me 'Sleepy Tom.' Why would they do that to me?"

After Brady spoke, the president was gifted with his own Bucs jersey with his last name and No. 46 on the back. 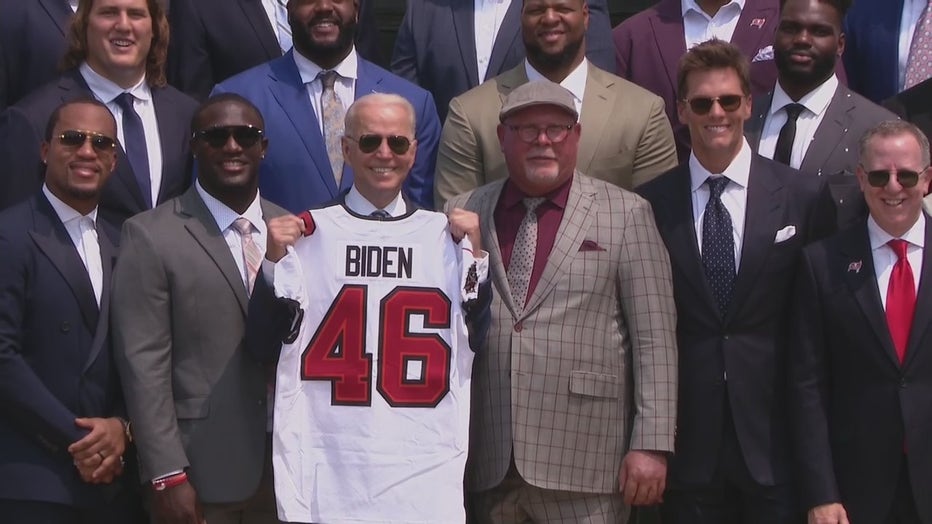 RELATED: All Buccaneers home games for the 2021 season are sold out

Tuesday marked the first time since 2017 that a Super Bowl champion team visited the White House.

The Philadelphia Eagles were disinvited back in 2018. The White House decided to cancel the visit after learning a "tiny" number of players planned to attend. The New England Patriots passed up the opportunity in 2019. The Kansas City Chiefs didn’t go last year because of the pandemic.