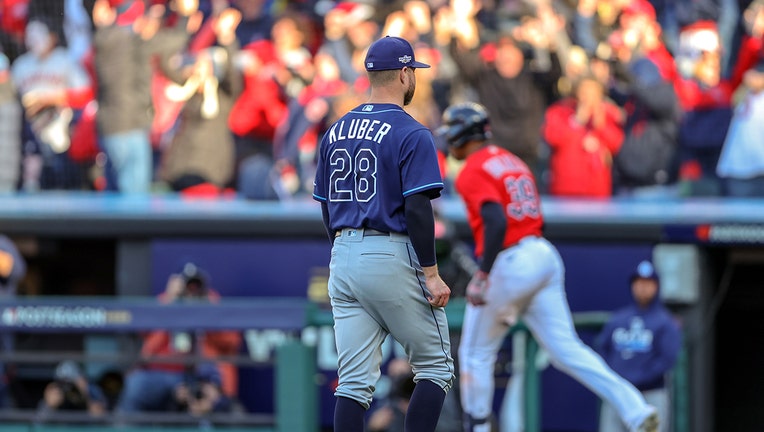 ST. PETERSBURG, Fla. - Four straight playoffs berths, a World Series appearance, and ample reasons to believe the future could be even brighter.

Despite back-to-back early postseason exits, the Tampa Bay Rays remain confident they’re built for long-term success, and that their persistence and commitment to developing young talent will be rewarded with a championship. Eventually.

"There’s plenty of reasons to see optimism when we look ahead," president of baseball operations Erik Neander said Tuesday, adding, "The biggest one to point to with a respect to that is our pitching. Our pitching is in a really good place. Our pitching and our defense are reasons why we’ve continued to be competitive."

Despite allowing just three runs in 24 innings over two games, the Rays were swept by Cleveland in their AL wild-card series. Tampa Bay’s chief postseason issue is coming up short on offense.

The lone Rays run came from Jose Siri’s solo homer in Game 1. They were limited to nine hits, struck out 29 times, and went 0 for 7 with runners in scoring position in the two games.

Meanwhile, they wasted strong outings by Shane McClanahan, Tyler Glasnow and others on a pitching staff that has the potential to be among the best in baseball if its starters can remain healthy.

"We got a small preview of what it could look like with having a McClanahan and Glasnow front of the rotation. Those guys deserve a lot of attention," Neander said. "Those are two guys that have been in Cy Young consideration the last couple of years."

Glasnow recovered quicker than expected from Tommy John surgery performed in August 2021, returning to make two late-season starts before working five scoreless innings of the 15-inning 1-0 loss to the Guardians in Game 2.

The Rays have never been in a financial position to sign big-money free agents or offer long-term contracts to veteran players. But in August, they reiterated a commitment to the future by giving Glasnow a two-year, $30.35 million contract extension that includes a franchise-record-tying $25 million salary for 2024.

That came on the heels of signing young shortstop Wander Franco to an 11-year deal worth up to $233 million last winter.

Neander, like manager Kevin Cash, is excited about the prospect of entering next season with a healthy Glasnow bolstering a rotation also featuring McClanahan, Drew Rasmussen and Jeffrey Springs.

"Expectations continue to be high," Neander said. "A disappointing ending largely because of the culture of winning that we’ve established. We’re going to stay at it. Be proud of that winning culture and try and do everything we can and really obsess over what we can do better to win that last game of the year."

The Rays won 86 games, their fewest in a full season since 2017. It was also the least among the 12 teams making the playoffs.

A big reason was inconsistency on the road: They went 51-30 at Tropicana Field, compared to 35-46 away.

Counting the playoff losses at Cleveland, the Rays finished on a seven-game skid, with all seven of the losses coming on the road.

Roster change is inevitable, knowing CF Kevin Kiermaier and C Mike Zunino are among players who could be on the move in the offseason.

Both of them missed much of the season with shoulder injuries, with Kiermaier batting .228 with seven homers and 22 RBIs in 63 games and Zunino going .148 with five homers in 36 games after being an All-Star and hitting a career-high 33 homers in 2021.

"You’re going to have some turnover. That’s just part of it," Neander said. "We have a sizable arbitration-eligible class this year. There’s decisions we have to make within that, how to best manage this group and what makes the most sense."

Franco is being counted on to rebound from an injury-filled season in which he batted .277 with six homers and 33 RBIs in 83 games. He spent two stints on the injured list before returning in early September and hitting .328 over his last 19 games.

"I can’t wait to see what next season brings. Wander faced a lot of challenges this year with the injuries," Cash said. "This kid wants to go out and play. He’s always played pain-free. He’s always kind of played with his hair on fire, and he didn’t know how to manage his workload. So, get him healthy, keep him healthy, and I’m betting he’s going to take off."