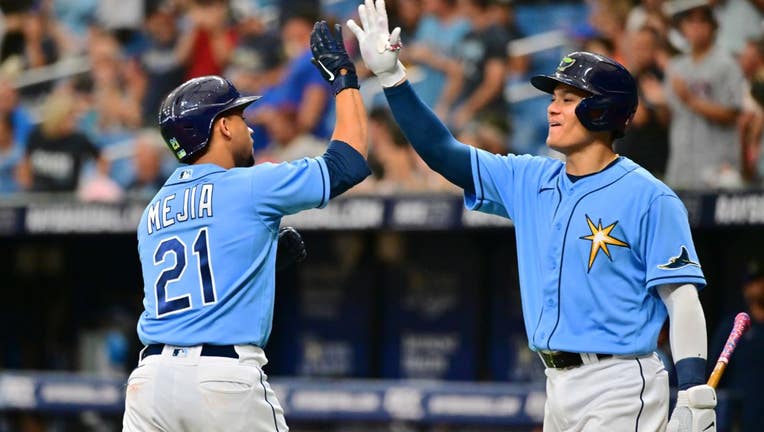 JULY 17: Francisco Mejia #21 of the Tampa Bay Rays celebrates with Yu Chang #9 after hitting a home run in the sixth inning against the Baltimore Orioles at Tropicana Field on July 17, 2022 in St Petersburg, Florida. (Photo by Julio Aguilar/Getty Ima

Ramírez, who was batting .329 in 77 games as a first baseman/outfielder, was hit in the right thumb by a pitch from Jordan Lyles in the first. Ramírez stayed in the game, scored a run and exited the next inning. He will be re-evaluated in two weeks.

The Rays are 51-41 and hold the top spot in the AL wild-card race. They enter the All-Star break at least 10 games over .500 for the sixth time — they made the playoffs the first five times.

Rougned Odor and Austin Hays homered for Baltimore, which is 46-46 at the break after going 52-110 last season.

Corey Kluber (6-5) gave up four runs and eight hits over six innings to win his third consecutive start. Jason Adam worked the ninth to get this fourth save in five chances.

Phillips drew a leadoff walk in the second from Lyles and scored to make it 3-0 on Josh Lowe’s two-out double.

Bryan Baker replaced Lyles and struck out all five batters he faced.

Hays made it 7-5 in the eighth when he homered on Pete Fairbanks' first pitch of the season. The Rays reliever had been out with a right lat strain.

Kluber hit Anthony Santander in the lower leg leading off the fourth, which keyed a two-run inning that had RBI singles by Adley Rutschman and Ramón Urías. Kluber limited the damage by getting a pair of outs with the bases loaded and one out.

Odor’s two-run homer in the sixth got Baltimore within 6-4. Mejía homered in the bottom half.

Orioles: RHP Félix Bautista injured his right hand Saturday when a hook on an exercise band came loose and the band struck the hand. He warmed up in the bullpen during the eighth inning.

Orioles: Open a seven-game homestand after the All-Star break against the New York Yankees on Friday night.