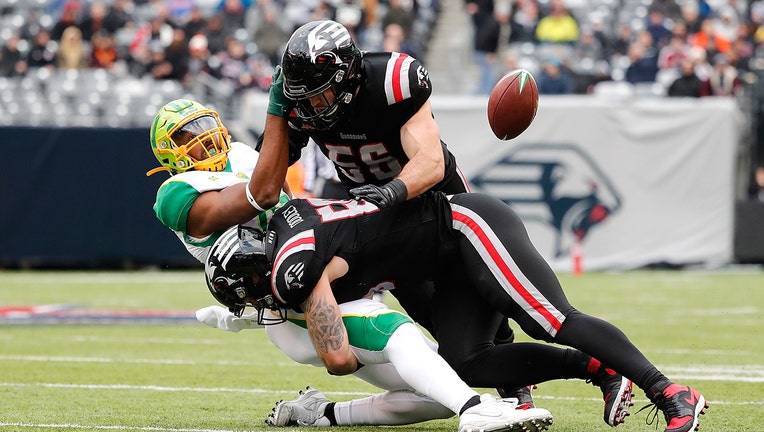 EAST RUTHERFORD, NEW JERSEY - FEBRUARY 09: Garret Dooley #59 and Ben Heeney #56 of the NY Guardians hit Nick Truesdell #85 of the Tampa Bay Vipers forcing a fumble during the first half of their XFL game at MetLife Stadium on February 09, 2020 in Eas (Michael Owens/Getty Images)

EAST RUTHERFORD, N.J. - The Tampa Bay Vipers didn’t quite match the excitement that the XFL opened with on Saturday.

The team’s offense put up the most yards in the XFL during Week One, but it was derailed by sloppy plays and too many turnovers.

After the New York Guardians found the end zone on their first drive, Vipers quarterback Aaron Murray went to work. He brought the Vipers inside the red zone but on first down from the 6-yard line, Murray forces it, it’s tipped and picked in the end zone.

The Vipers trailed 17 to nothing after the first half.

One the second half, Murray was sacked and stripped on their first possession. Fans on Twitter and other social media platforms were clamoring for former USF quarterback Quinton Flowers and they got their wish.

The former USF star ignited the Vipers with three runs for 23 yards, helping Tampa Bay into the red zone. Then, the Vipers turned back to Murray, and he failed on three shots from the 5-yard line.

The Vipers settled for a field goal, and that was the only time they scored. The team lost 23-3.