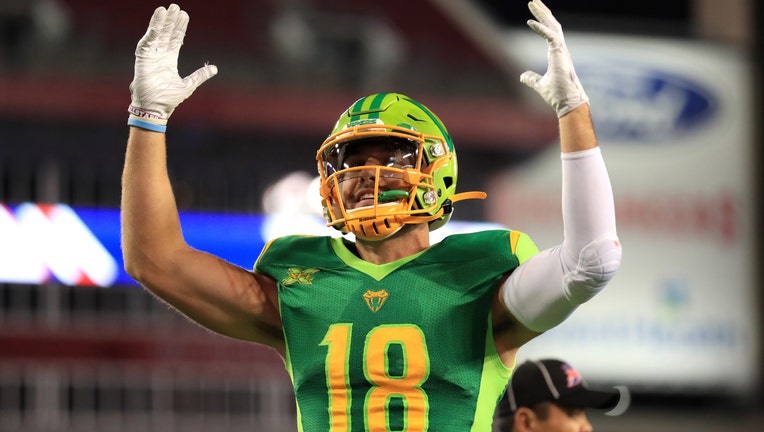 TAMPA, FL - MARCH 1: Reece Horn #18 of the Tampa Bay Vipers celebrates after a touchdown during the XFL game against the DC Defenders at Raymond James Stadium on March 1, 2020 in Tampa, Florida. (Photo by Carmen Mandato/XFL via Getty Images)

TAMPA, Fla. - The Tampa Bay Vipers (1-3) strike for their first win. Tampa Bay, the last winless team shutout the D.C. Defenders (2-2) in front of 12, 249 at Raymond James Stadium. Tampa Bay scored on their first two possessions to jump out to a 13-nothing lead.

Viper runningback De'Von Smith recorded the first 100-yard rushing game in XFL history with his 103-yard performance on 21 carries and Jacques Patrick ran for 94 yards, playing with a heavy heart after the recent passing of his father.

Quarterback Taylor Cornelius, who won the starting job over former USF Quinton Flowers complete 24-for-31 for 211 yards and a touchdown. He also added a rushing score. Flowers left the team on Monday and there is no word on whether he'll return to the team .

The Vipers are on the road next Sunday at 9:00 to face the Los Angeles Wildcats.