When a group of Michigan high school basketball players accidentally added the wrong phone number to their group chat, it turned out to be Sean Murphy-Bunting of the Buccaneers. They FaceTimed with the cornerback and others -- including Tom Brady.

TAMPA, Fla. - This is the time of the year for Tom Brady to shine. December football is when Brady raises his game and becomes even hyper-focused. No player wins more at this time of the season. Brady is 66-16 in his 22-year career, including a perfect 3-0 with the Buccaneers.

"I think [it's] the work ethic of the team and the commitment to getting better, the camaraderie," said Brady. "Some of those things don't show up in the first four weeks of the season but over the course of a long season, you get to see a lot of intangible qualities that I think good teams [have], caring about one another, making the right plays consistently. In the NFL, any team can win one game. We're all talented enough to do that. I think you could be relatively talented and go 8-8. But it's hard to have a really positive record, and it's always about the team committing to each other and the teammates caring about one another and consistently doing the right thing, putting yourself in a position to win."

"[Brady] just tells us, ‘I just want all of us to be on the same page,'" shared Tristan Wirfs. "This time of year, teams can either fall off or keep getting better. He said he wants us to keep getting better, and I know all of us want that. I don’t know what it is about him, but he’s pretty special." 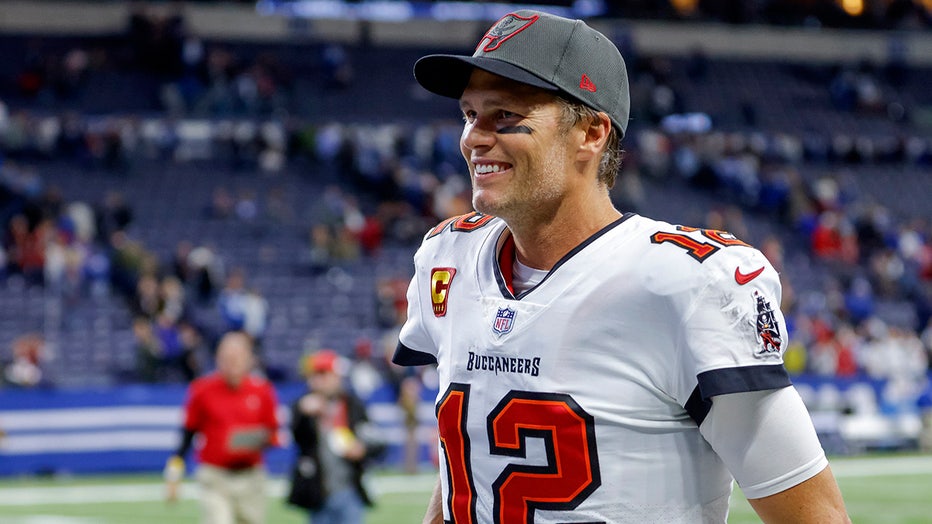 Tom Brady is seen after the game against the Indianapolis Colts at Lucas Oil Stadium on November 28, 2021 in Indianapolis, Indiana. (Photo by Michael Hickey/Getty Images)

Brady's success hinges on the protection upfront. Among quarterbacks that have played in every game this season, Brady has been sacked the least – just 14 times in 11 games.

"They allow us to do everything that we do," explained Bucs offensive coordinator Byron Leftwich. "I say it time-in and time-out what we ask them to do, [they do]. Sometimes they go unnoticed, which is a good thing for an offensive line. When the offensive line isn’t getting noticed that’s always a good thing. I think it all starts there with us. It started there with us last year – run game, pass game. It will start there with us this year, run game, pass game. Those guys have been doing a heck of a job for us really all year. They’ve been the most consistent group all year."

While Brady wants to win another Lombardi Trophy, success for him at this point in his career is seeing his teammates also enjoying their success. 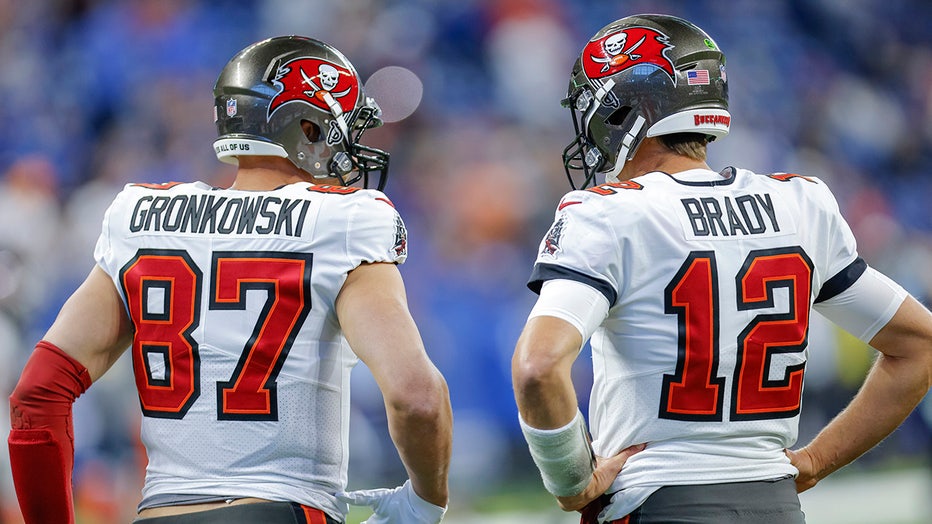 Rob Gronkowski and Tom Brady are seen before the game against the Indianapolis Colts at Lucas Oil Stadium on November 28, 2021 in Indianapolis, Indiana. (Photo by Michael Hickey/Getty Images)

"I want to see people succeed," said Brady. "I'm kind of at the end of my football journey, you know? There's not a lot of football I have left, however long it goes, but certainly close to the end. But those guys are at the beginning, or just the middle part, so they've got a lot to achieve in their careers and I want to see everyone maximize their potential. For me, that's the best part about football at this point, is watching other guys win. I've done a lot of winning. I've won a Super Bowl, I've taken care of family vacations. It's nice to see other people do those things, too. Watching them be successful is what I think is the best connection you can make."

"I'm having a great time," he added. "I don't want to start talking about retirement."

At the level Brady is playing at, the Bucs don't want to hear anything about retirement either.