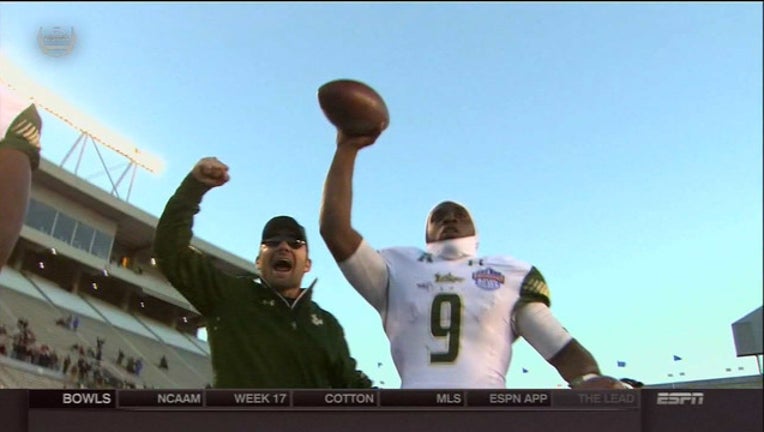 BIRMINGHAM, Ala. (AP) - South Florida's Quinton Flowers says there were a lot of big-name college football programs that thought he could be a star player. As a running back. Or maybe as a safety.

But Flowers knew he could be a great quarterback. And on Thursday in the Birmingham Bowl against a team from the Southeastern Conference, he proved it once again.

Flowers ran for three touchdowns and threw for two more -- including what proved to be the winner in overtime -- to help No. 25 South Florida beat South Carolina 46-39.

Flowers said South Carolina coach Will Muschamp -- who was then at Florida -- was among the coaches who wanted him to switch positions. Muschamp got an up-close look at Flowers' quarterback skills on Thursday.

South Florida (11-2) squandered a 39-21 lead in the second half, but recovered for its school-record 11th victory. Flowers threw a 25-yard touchdown pass on the first play of overtime, finding Elkanah Dillon in the end zone.

South Carolina's overtime drive ended after Jake Bentley was sacked by Mike Love on fourth down. Bentley fumbled and Khalid McGee recovered to end the game.

It was a sweet ending for a South Florida program that has had a lot of upheaval during December. Coach Willie Taggart left for Oregon after the regular season and former Texas coach Charlie Strong was hired a few days later.

But the Bulls, who played Thursday under interim coach T.J. Weist, pushed aside the distractions and finished their season with another win.

"The bottom line is we finished this game off strong. We finished it right," Weist said. "We came through in the end."

Flowers, who was selected the game's Most Valuable Player, completed 23 of 32 passes for 261 yards and ran for 105 yards on 21 carries.

The Bulls controlled the game for most of the afternoon, but the Gamecocks rallied to tie it at 39 with 1:11 remaining on A.J. Turner's 1-yard touchdown run and a 2-point conversion.

Bentley completed 32 of 43 passes for 390 yards, three touchdowns and two interceptions. Deebo Samuel caught 14 passes for 190 yards and a touchdown.

Muschamp said he was pleased with the offense. It was the defense -- specifically the lack of an effective pass rush against Flowers -- that left him frustrated.

"When you score 39 points, you should win the game," Muschamp said.

South Carolina (6-7) was hurt by five turnovers, including a pick-six thrown by Bentley that Tajee Fullwood returned 47 yards.

South Florida: The Bulls felt they weren't getting much respect on a national level after their 10-win regular season. A win over an SEC opponent is more evidence that South Florida might have been a little underappreciated.

South Carolina: The Gamecocks had their chances, but too many crucial mistakes doomed the program to a 7-loss season. The good news is South Carolina has a promising young quarterback in Bentley.

South Florida: The Bulls have a lot of changes in store as the Strong-era begins. South Florida looks well-positioned to be a factor in the AAC for years to come.

South Carolina: The Gamecocks took a small step forward during Muschamp's first season. Now he'll try to improve the talent on the roster during recruiting to get the program back among the SEC East's elite programs.