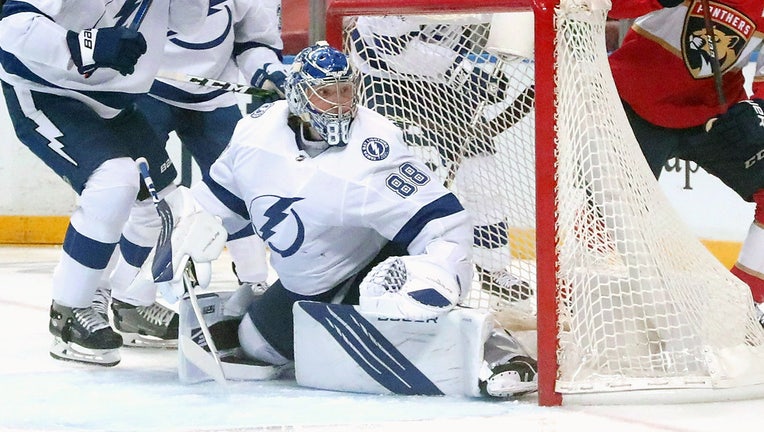 Andrei Vasilevskiy of the Tampa Bay Lightning skates against the Florida Panthers in Game Two of the First Round of the 2021 Stanley Cup Playoffs. (Photo by Bruce Bennett/Getty Images)

TAMPA, Fla. - As entertaining as Game 1 was to watch. It’s not the type of game the Tampa Bay Lightning feel will lead them to another Stanley Cup. Game 2 was more the Lightning’s style.

"We don't want to play too many 5-4 games in the playoffs," Steven Stamkos said after the Game 2 win. "This was more indicative of a playoff style. You've got to defend hard and it's not easy, but we stuck together tonight. Vasy was huge. The penalty kill was huge. It was just an all-around great effort."

With a 2-0 lead, the Lightning got their chance to play the defensive game that fits them. Clinging to a one-goal lead in the third, Andrei Vasilevskiy was perfect, stopping all 13 shots he faced in the final period.

"We know he's the best goalie in the world," continued Stamkos. "Some huge timely saves down the stretch when they were pushing the last 10 minutes of the third. He's our rock back there and he was outstanding tonight and a big part of that win."

"The kill was outstanding, especially it always seems to work that way," said Jon Cooper.  "You have the lead and you get something called on you late and we had to kill it off. I thought that was a huge part of the game that we killed it off. Guys were laying out, blocking shots and getting clears. You need to do that to win hockey games this time of year, and guys pulled through."

Coming home with a two-nothing lead in the series puts the Lightning in full command. Nearly 87% of teams that win the first two games have gone on with take the best-of-seven-game playoff series.