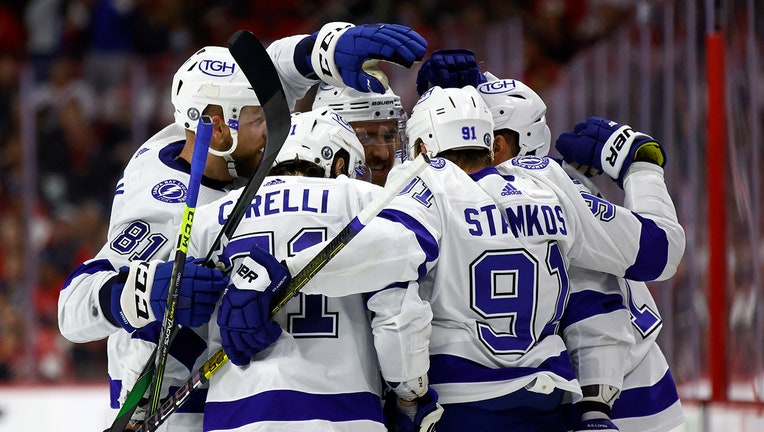 RALEIGH, NORTH CAROLINA - JUNE 01: The Tampa Bay Lightning celebrate following a goal by Alex Killorn #17 during the second period in Game Two of the Second Round of the 2021 Stanley Cup Playoffs against the Carolina Hurricanes at PNC Arena on June 0

RALEIGH, N.C. - Andrei Vasilevskiy has spent two games turning nearly every shot away for the Tampa Bay Lightning. A couple more, and the reigning Stanley Cup champions could be headed to the next round.

Alex Killorn and Anthony Cirelli scored while Vasilevskiy carried a shutout into the final minutes, helping the Lightning beat the Carolina Hurricanes 2-1 on Tuesday night for a 2-0 lead in their second-round series.

As in the first round against Florida, the Lightning have opened a best-of-seven series with a pair of road wins. This time, it comes against the Central Division champion and a team that was in the Presidents’ Trophy hunt until the final week of the regular season.

"We’ve been through (road playoff games) before," Tampa Bay coach Jon Cooper said. "And we’ve got a group that believes in how to play and what you need to do to shut a game down. ... I think when you just have that overall mentality and everybody puts the team first, good things and magical things can happen. And that’s what these guys are doing."

Now Tampa Bay heads home for two games, with Game 3 on Thursday, and a chance to sweep.

"It was rocking these last two games," Lightning captain Steven Stamkos said of PNC Arena with more than 16,000 rowdy fans. "To come in here and get both wins was huge. We know how hard it is to win this time of the year, period."

Vasilevskiy finished with 31 saves after being named one of three finalists for the Vezina Trophy presented annually to the league’s top goaltender. That came two days after he made 37 stops in Game 1, including 15 saves in the opening period.

Both games ended the same way, with Carolina down 2-1 and spending the final minute with the empty net and extra attacker in a desperate tying attempt.

"It does make you sit an inch taller on the bench when you’ve got him back there," Cooper said of Vasilevskiy.

Andrei Svechnikov got Carolina on the board with 1:30 left, taking a feed from Jordan Staal and finishing from the top of the crease.

"It was a pretty good game, played pretty hard," Carolina coach Rod Brind’Amour said. "You’re playing the best team in the world and we’re going toe-to-toe, that’s how it feels like, that’s for sure. Certainly not getting overwhelmed. We just didn’t get a break.

"Two games, we’re just fighting and trying to find that one and we haven’t been able to get it."

Killorn got the Lightning on the board 7:09 into the second period when he whipped a straightaway shot past Alex Nedeljkovic. The goaltender was shielded by teammate Jaccob Slavin tussling with Cirelli and didn’t appear to see the puck until it was past him in the net.

Cirelli added to Tampa Bay’s lead by taking Victor Hedman’s stretch pass and shaking free from Brady Skjei before converting a backhand to make it 2-0 at 8:06 of the third.

The Hurricanes took a significant hit in this one when Vincent Trocheck was hurt late in the second when the center and teammate Warren Foegele banged legs as they skated by each other. Trocheck put little to no weight on his right leg as he skated to the bench, slamming his stick along the way before heading to the locker room.

He played one short shift in the third but didn’t return.

Tampa Bay was without defenseman David Savard for a second straight game due to an upper-body injury.

The Hurricanes’ chances included Martin Necas going wide of the net on a short-handed 2-on-1 breakaway in the second period, with that play ending with Vasilevskiy’s stick out of his hand and spinning on the ice as he flailed at the puck.

"I think we as forwards, including myself, we’ve got to get in front of this guy and get around the net and get more guys there when the puck’s going there," Staal said of creating traffic around Vasilevskiy.

Killorn’s goal marked the seventh time in eight playoff games, and sixth in a row, that the Hurricanes have surrendered the game’s first goal. The exception was a shutout win against Nashville in Game 2 of the first-round series.