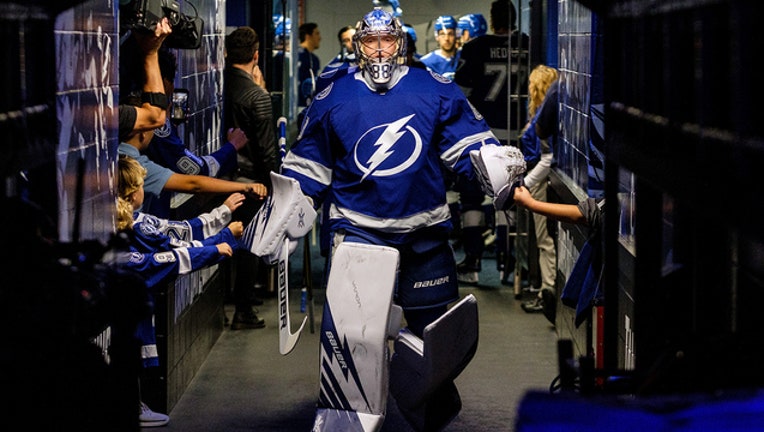 Goalie Andrei Vasilevskiy gets ready for pregame warm-ups against the Columbus Blue Jackets before Game Two of the Eastern Conference First Round on April 12, 2019 in Tampa, Florida. (Photo by Scott Audette/NHLI via Getty Images)

Vasilevskiy​​​​, 25, played in 53 games for the Lightning last season, posting a 39-10-4 record and earning a 2.40 goals-against average and a .919 save percentage. He became the Lightning's first Vezina Trophy-winner as the NHL's top goaltender and he led the league in wins.

"I'm very excited to sign this extension with the Lightning today," Vasilevskiy said in a statement released by the Lightning. "I'd like to thank the entire organization, including Mr. Vinik, Julien BriseBois and the great Bolts fans, for making this such a great place to play and live for me and my family."

"The Lightning are very proud to extend Andrei for another eight years today," general manager Julien BriseBois said. "Since joining the organization Andrei has shown unmatched work ethic and professionalism both on and off the ice. We look forward to him continuing his career in Tampa Bay for the foreseeable future."

The eight-year contract is worth an average annual value of $9.5-million.