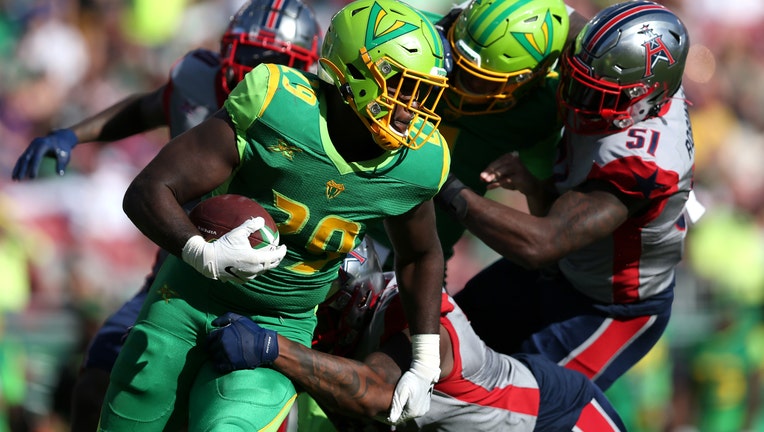 TAMPA, FL - FEBRUARY 22: Jacques Patrick #29 of the Tampa Bay Vipers carries the ball during the XFL game against the Houston Roughnecks at Raymond James Stadium on February 22, 2020 in Tampa, Florida. (Photo by Carmen Mandato/XFL via Getty Images)

TAMPA, Fla. - For the first time in a long time, there is professional football at Raymond James Stadium in February. More than 18,000 fans turned out for the Tampa Bay Vipers home opener against the Houston Rougnecks.

Once the game began, fans weren't shy about wanting USF football alum Quinton Flowers to be the Vipers quarterback. If the "We want Flowers" chants weren't proof enough, 2019 USF Fan of the Year Lauren Pickel provided some insight.

"Quinton Flowers isn't being used the way he needs to be used," Pickel told FOX 13 Sports after the Vipers' 34-27 loss to Houston, dropping them to 0-3. "(Marc) Trestman, if you're listening ... Start Flowers, or you're going to lose everyone here."

Flowers himself expressed gratitude at the fans support after the game.

"This is home…This is my second home," said Flowers, hours after scoring the first offensive touchdown in Vipers history. "These people believe in me. They stuck by me. I'll do whatever it takes to win."

The Vipers are back at home again next Sunday against the DC Defenders.