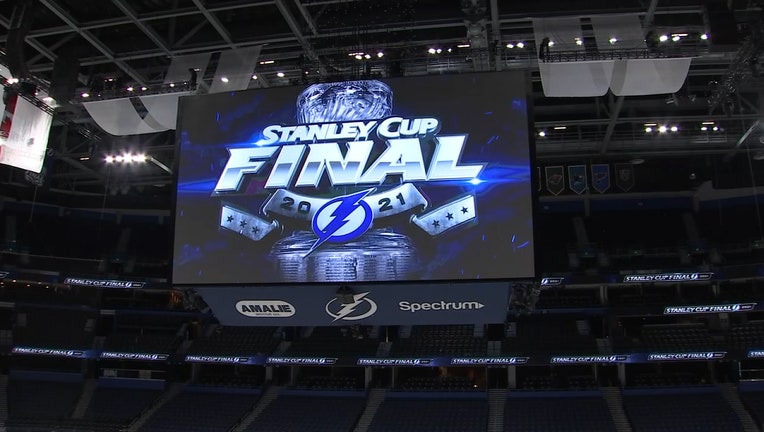 TAMPA, Fla. - The Bolts played a near-perfect game against the Habs on Monday night, and they're hoping to continue their plan for success heading into the second game of the Stanley Cup Final.

The only goal that bypassed Andrei Vasilevskiy is the one that clanked off two Tampa Bay Lightning players on the way in. Still, Jon Cooper believes the team will raise their game, even more, tonight in Game 2. That’s because they expect a greater sense of urgency from the Canadiens.

The Lightning believe that their key to success is no matter how upside-down the game may get, they must stick to Cooper’s game plan.

"I just keep preaching to the guys. You’re not going to win a series in one night. That’s not how it goes," Cooper said. "There’s just curveballs and sliders and fastballs and they're all thrown at you at different times, but if you just keep being consistent with your game, we trust that good things will happen."

Last season was one the Coopers said they would never forget. This season, even more so. Last year, their dad was gone with the team during the coronavirus pandemic. They were isolated for the health and safety of everyone. This year, they’ve gotten to experience the whole run-up to the team’s Stanley Cup Final appearance together.

RELATED: This Stanley Cup Final feels different -- in a good way -- for the Cooper family

While the Canadiens have a knack for bouncing back this postseason, the series opener was an eye-opener against Tampa Bay’s top trio of Ondrej Palat, Brayden Point, and Nikita Kucherov. Because the Lightning gets the last line change again in Game 2 on Wednesday night, Cooper can get Point’s line on the ice against Nick Suzuki’s as much as he wants, and that does not appear to be a favorable matchup for Montreal.

MORE: For the first time, Lightning will play outdoor NHL game in 2022

That did not happen in Game 1, when Point’s line scored twice on Suzuki’s line on the way to breaking it open for a 5-1 victory. Giving the puck away against that caliber of opponents isn’t a recipe for Montreal hanging with Tampa Bay.

Of course, the Canadiens have felt this way before, looking outclassed in the semifinal opener against Vegas before roaring back and winning in six games. The memory of taking over against Vegas and erasing a 3-1 series deficit to beat Toronto in the first round has players confident they can replicate those comebacks.

The Lightning know very well how to play the long game and how the Canadiens feel after losing a series opener. They did last year in the final falling behind to Dallas and last round against the New York Islanders.

Tampa Bay players have said on multiple occasions the Canadiens are "here for a reason" and that they won’t underestimate the opponent standing in their way of a second Cup championship. But the pressure is now squarely on Montreal to show it belongs.