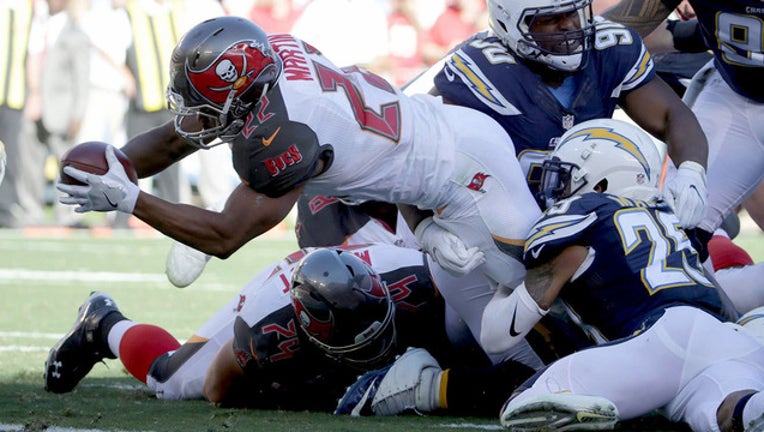 Doug Martin scores against the San Diego Chargers during the first half of a game at Qualcomm Stadium. (Photo by Jeff Gross/Getty Images)

Rivers had the Chargers on the move in the final minutes before Tandy got in front of a pass to Dontrelle Inman and picked it off.

Tandy's momentum carried him into the end zone, giving the Bucs the ball on their 20. They were able to run out the clock.

The Bucs (7-5) pulled into a tie with Atlanta atop the NFC South.

Tampa Bay benefited from a short punt by Drew Kaser to start the winning drive on their 46. Winston found Brate for the TD on the fourth play of the drive, and then hit Mike Evans on a conversion pass for a 28-21 lead.

The Chargers (5-7) were trying to get back to .500 for the first time since Week 2. They remain buried in the AFC West basement.

With the Chargers nursing a 14-10 lead and deep in their territory, Rivers' pass to Tyrell Williams was deflected by Vernon Hargreaves. David caught it and ran in from 15 yards to give the Bucs their first lead of the game.

Rivers came right back and led a drive capped by a nice 40-yard touchdown toss to Williams for a 21-17 lead.

Tampa Bay got inside the San Diego 20-yard line on its next drive, but had to settle for Roberto Aguayo's 27-yard field goal.

Winston's go-ahead scoring pass to Brate came with 9:01 to play.

Rivers threw a 35-yard touchdown pass to Inman on the game's first possession. Winston was intercepted by Casey Hayward on Tampa Bay's first possession but Josh Lambo was wide left on a 53-yard field goal try.

Winston then led the Bucs on a drive capped by Doug Martin's 2-yard touchdown run on a great second effort.

The Bucs outscored the Chargers 21-7 in the second half. They've also beaten Chicago, Kansas City and Seattle in their winning streak. Winston completed 20 of 30 for 280 yards.

Chargers rookie defensive end Joey Bosa sacked Winston for a 12-yard loss on second-and-10 from the San Diego 15 late in the first half. Jacquizz Rodgers got 14 back on the next play, but the Bucs had to try a 31-yard field goal and Aguayo pushed it wide right.

Bosa has 5 1/2 sacks. He might have had more by now, but he missed all of training camp in a nasty contract spat with the Spanos family and then hurt a hamstring that cost him the first four games.

Tampa Bay wide receiver Cecil Shorts III was taken off the field on a cart after sustaining a knee injury on a hard hit by San Diego's Jahleel Addae following a catch on the Bucs' first possession. Shorts was tended to for a few minutes and then put on the cart. The entire Buccaneers team came out near the cart, and several of the players slapped hands with the wide receiver. Shorts pumped a fist toward his teammates as he was driven off.