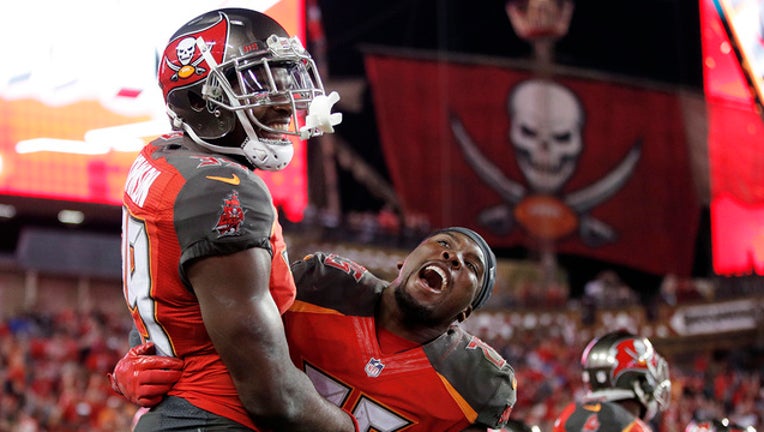 Isaiah Johnson celebrates with Peyton Barber after returning a fumbled punt for a touchdown against the New Orleans Saints. (Photo by Joe Robbins/Getty Images)

TAMPA (AP) - The New Orleans Saints weren't in much of a mood to slip on t-shirts and hats to celebrate their first NFC South championship in six years.

Despite achieving a goal of winning the division and ensuring a home playoff game, Sunday's 31-24 loss to the Tampa Bay Buccaneers left the team with a bittersweet feeling.

"That was one we felt like we should have won. But, bottom line is we are NFC South Champions, and there's a lot to be proud of," Brees said. "It's been a long season. We've had our ups and downs at times. We've shown ourselves what is possible."

Rookie Alvin Kamara returned a kickoff 106 yards for a touchdown and also had a TD rushing for the Saints (11-5), who'll host division rival Carolina (11-5) in the NFC wild-card round next Sunday.

The Panthers' 22-10 loss to Atlanta on the final day of the regular season denied Carolina the NFC South title.

"We had hats, shirts. We talked about the accomplishment," Saints coach Sean Payton said. "We talked about where we're at. We start kind of another season right now."

The scene in the other locker room Sunday understandably was a lot more upbeat.

Winston threw for 363 yards and ran for a touchdown, special teams player Isaiah Johnson scored on a fumble return and the Bucs (5-11) snapped a five-game losing streak.

Coach Dirk Koetter was told before the finale that he would return for a third season at Tampa Bay's coach, however Winston said it was still important to go out with a win.

"It took a lot of courage for the Glazer family to bring me back, to bring the staff back with the record what it is. I really appreciate that and we'll start the evaluation process (Monday)," Koetter said. "We'll send these guys out on vacation and start working on 2018."

He converted a fourth-and-10 from his own 5 yard line with a 12-yard completion to Cameron Brate and threw 9 yards to Mike Evans on third-and-1 to keep the drive going at the Tampa Bay 35.

The fourth-year pro, who was intercepted three times, found Godwin racing up the right sideline just ahead of Saints cornerback Ken Crawley to put the Bucs ahead for good.

Koetter, who calls Tampa Bay's offensive play, actually called for a pass to the left sideline to move the ball into field goal range. Winston recognized that Godwin was going to draw single coverage and went for the rookie, whose playing time increased the past two weeks because DeSean Jackson was injured.

"I wish somebody would have took a video of the coaches on the sidelines because I could hear them. They were like: 'Noooooo!'" Winston said. "But we scored. That's how coaches are."

Brees threw a 3-yard TD pass to Zach Line for a 24-20 New Orleans lead midway through the fourth quarter, but New Orleans couldn't make it stand.

Patrick Murray, whose missed an extra point was the difference on the scoreboard when Winston launched the winning drive, made a 42-yard field goal to help the Bucs pull within one point with four minutes left.

Kamara, who's teamed with Mark Ingram to give New Orleans the only tandem in NFL history 1,500-plus scrimmage yards and more than 10 TDs in the same season, wiped out an early 7-0 deficit with his kickoff return.

The rookie's 7-yard TD run on the Saints' first offensive possession made it 14-7.

The touchdowns were the 13th and 14th of the season for Kamara, who has eight rushing and five receiving in addition to the second 100 yard-plus kickoff return for a TD allowed by Tampa Bay in two weeks.

Brees finished 22 of 30 for 245 yards, one touchdown and no interceptions. Michael Thomas went over 100 receptions for season with six catches for 94 yards.

Godwin has seven receptions for 111 yards. Adam Humphries had seven catches for 102 yards for Tampa Bay, which failed to make the playoffs for the 10th consecutive season.

Brees will be away from the Saints for a couple of days this week, attending the funeral for his grandfather, however he's not expected to miss any practice time as the team prepares to face Carolina. "I'll be with my family (Monday) and Tuesday, burying my grandfather," Brees said. "I'll bring along the lap top and try and do what I can on the plane. I'll get my preparation in."

Saints: None reported during the game.

Buccaneers: Coach Dirk Koetter, who's 13-18, was told before the finale that he will return for a third season.