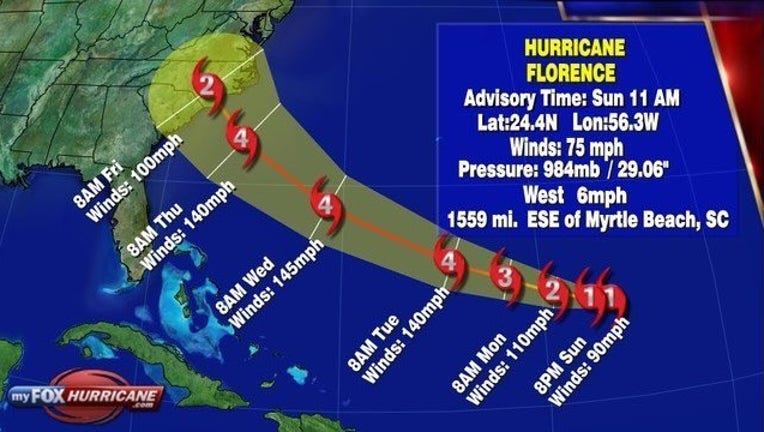 MIAMI (AP) - Tropical Storm Florence turned into a hurricane Sunday morning and swirled toward the U.S. for what forecasters said could be a direct hit on the Southeast toward the end of the week.

The storm's sustained winds reached 75 mph (121 kph), just over the threshold for a hurricane, as it made its way across the Atlantic, about 750 miles (1,210 kilometers) southeast of Bermuda, the National Hurricane Center said. It was moving west at 6 mph.

The Miami-based center said that it was still too early to predict the hurricane's exact path but that a huge coastal area from northern Florida to North Carolina should prepare for a major hit.

It is forecast to approach the southeastern U.S. coast on Thursday.

The governors of North and South Carolina and Virginia declared states of emergency to give them time to prepare, and the Navy said ships in Virginia's Hampton Roads area would leave port for their own safety.

Dangerous swells generated by Florence affected Bermuda and have begun to reach parts of the Eastern Seaboard.