TAMPA, Fla. - Forecasters say the second tropical depression of the season has formed and they are now watching two other areas for tropical development, though none of the potential systems poses an immediate threat to Florida.

As of Monday morning, Tropical Depression Two had formed off the North Carolina coast. The National Hurricane Center says it will move northeast, away from the U.S. coast.

As expected, a low-pressure system in the southern Gulf of Mexico has an increasing chance of forming into a tropical depression, only a 20% chance in the next two days but 60% by the end of the week.

"Gradual development of this disturbance is possible during the next couple of days while it meanders near the coast of Mexico, and a tropical depression could form late in the week when the system moves northward into the central Gulf of Mexico," the NHC forecast noted.

Heavy rain is possible along the central Gulf Coast as the system slowly moves north.

"It should stay in the central Gulf or western Gulf," Osterberg added.

The third area of interest is just off the coast of Africa. A strong tropical wave has just a low chance of development in the next few days thanks to dry air aloft and strong upper-level winds. 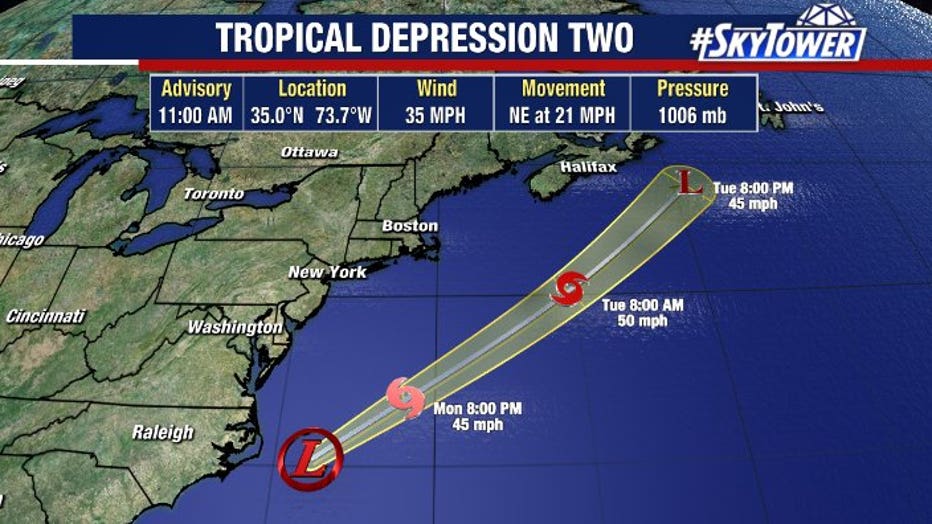 Forecasters expect a busier-than-average hurricane season this year, though not as busy as last year’s record-breaking season.

After Subtropical Storm Ana’s brief appearance last month, the next name on the 2021 list is Bill.

LINK: Forecasts and models on MyFoxHurricane.com