Meteorologist Jim Weber says we're seeing a typical increase in activity in the Atlantic and Caribbean as we close out June. A tropical wave north of South America still has low chances of development over the next 5 days, but it shows potential for possible movement into the Caribbean and Gulf of Mexico after that.

Potential Tropical Cycle Two is moving 20 mph west toward Central America. According to the National Hurricane Center, Its "fast motion" will continue through Thursday night. The storm will move across the southwestern Caribbean Sea through Friday, cross over Nicaragua or northern Costa Rica by Friday night, and emerge over the Pacific Ocean by Saturday.

"As it works westward into the western Caribbean, whether or not it gets that low-level center, I don’t think, at this point, really matters because it’s going to be a tropical storm or at least bring tropical storm-like conditions to Central America," explained FOX 13 meteorologist Dave Osterberg.

Just one month ago, Agatha formed and started the Eastern Pacific hurricane season as a strong, record-breaking hurricane. Then, it was torn apart by Mexico's rough terrain and re-emerged in the Caribbean. Potential Tropical Cyclone One eventually formed with Agatha's remnants in the mix. Soon after, it organized to become Tropical Storm Alex, the first named storm of the Atlantic hurricane season. 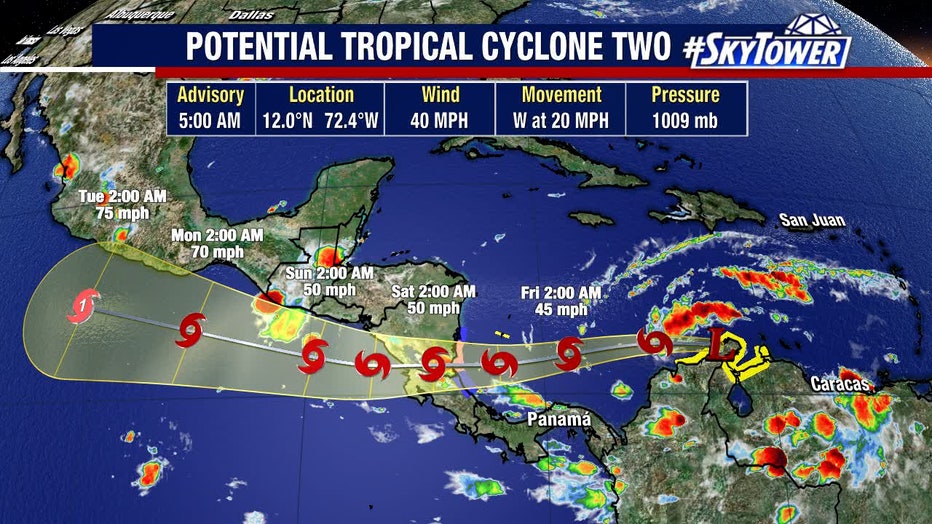 "Catch this, [Potential Tropical Cyclone Two] is going to move into the eastern Pacific. Wow, that doesn’t happen very often does it? We had one come from the Pacific into the Caribbean already, and now we are going to have one in the Caribbean go to the Pacific? Twice in the same year? Wow, that’s very rare," Osterberg explained. "It could become a hurricane out in the Pacific, early next week."

He said it is possible that a similar scenario could play out where Bonnie – if named – could get a new name in the Pacific Ocean – but several factors would have to come into play.

"If it crosses Central America, and it is still a tropical storm or a tropical depression, it will keep the name Bonnie, assuming it gets the name Bonnie," Osterberg said. "If it gets torn apart…and it’s kind of just remnants of and then it redevelops, then it will take the next name on the list in the eastern Pacific, which is Darby." 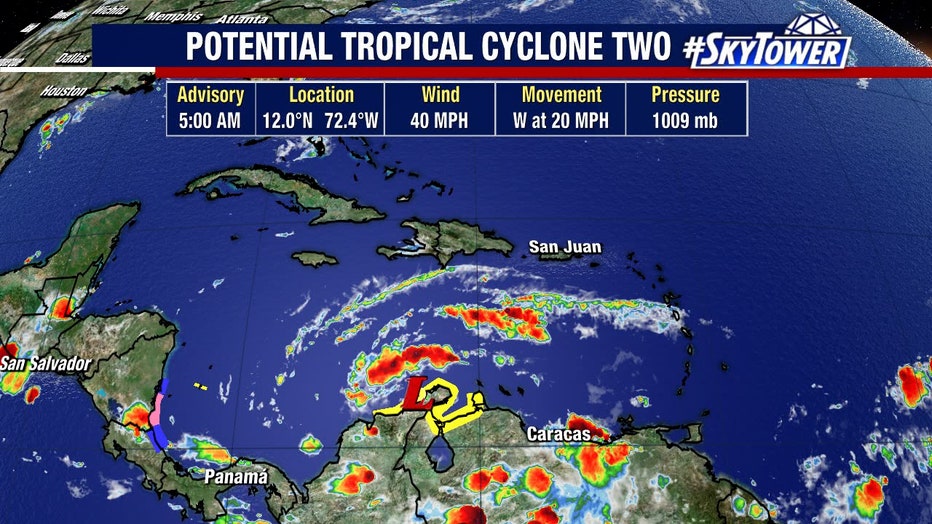 Either way, it won't impact the U.S.

"The way it’s moving and how fast it’s moving – look it’s moving west at 20 – it’s going to move over a very small sliver of land," Osterberg offered. "I think this holds together. If we can get Bonnie today, then I think you’ll end up having Bonnie in the eastern Pacific."