Good Catch: As water cools, more pompano will show up

Every Friday morning, Captain Dylan Hubbard of Hubbard's Marina joins Good Day to fill viewers in on his fishing forecast as we head into the weekend. Here is his fishing report for November 1, 2019.

Snook are really prolific lately from the upper bay to the beaches and from the mouth of the rivers out through the intercostal. We are finding them at night around the bridges, docks and piers, especially where lights are holding the bait. During the day they are up on the flats, on the beaches and in the passes. They seem most active in the passes at night.

If I was going snook fishing at night, I would hit dock lights and bridges, and during the day I would target the flats and docks around the mouths of residential canals that have some water flowing and some grass flats in the vicinity. However, we are still seeing snook caught along the beaches from our local piers, jetties and even beach fisherman -- which is surprising for how late in the year it is but the water temperatures really haven’t gone down much from our long summer time period.

Snook eat a variety of live bait from shrimp to greenbacks to pilchards to finger mullet and even those pass crabs. However, live shrimp, pigfish and larger green backs are my favorite and most commonly used live baits for the snook.

Spanish mackerel are really thick around the area too holding on the beaches and in the passes and around the piers, plus all over Tampa Bay, too. It’s a great time to get out there with some free line greenbacks or a gotcha plug to have some fun targeting these crazy fast fish on lighter tackle. There’s lots of bait in the area and these guys can be found easily if you find the birds working a bait school.

Birds only get the opportunity to eat on a bait school when predatory fish below are pushing them up to the surface due to the fish schooling them up while feeding actively. If you find the birds, you will find the mackerel. Often lately there’s jack crevalle or bluefish mixed in with the mackerel action too.

Redfish bite is going pretty good as well. We are still seeing them on the beaches and near shore in large groups, plus in the bays and intercostal and the oyster bars are holding them best. Redfish will be easier. As the waters cool, they really tend to stack up around the residential docks in the canals to stay warm in the shallower waters where the dark bay mud holds the day’s heat and keeps them warmer.

Until then, the oyster bars are what I would suggest targeting during the day. I always carefully monitor the water flow as often they will be ambushing prey getting pushed over the oysters. If the tide is flowing out of the north, you’d want to be south of the oysters casting up on top of them and letting your bait get pushed off the oysters by the tide. This will give you the most natural presentation, and help you be more successful while targeting the redfish.

At night, the bridge lights, piers and docks are great areas to target the redfish at the edges of the lights on or near the bottom. Working your lure more slowly, keeping it down on the bottom, is a great way to target those redfish. Live bait fishing a split shot is a great idea to get the bait heading to bottom while trying to keep the most natural presentation.

Trout bite has been pretty good at night around piers, docks, and bridges and during the day on the edges of the flats. Trout have been bigger lately too and as the water cools we often see some larger trout being caught. Trout love lighter tackle like 10 to 20-pound test max with 2000-3000 series reels. Typically, live shrimp or greenbacks work really well for the trout. My favorite artificial bait for trout is a DOA shrimp. They work so well if you know how to work them.
My father always told me if you think you’re working it slowly enough, slow down even more. The trick to the DOA being successful is you presenting that bait to mimic a shrimp which takes lots of patience but it’s worth it. 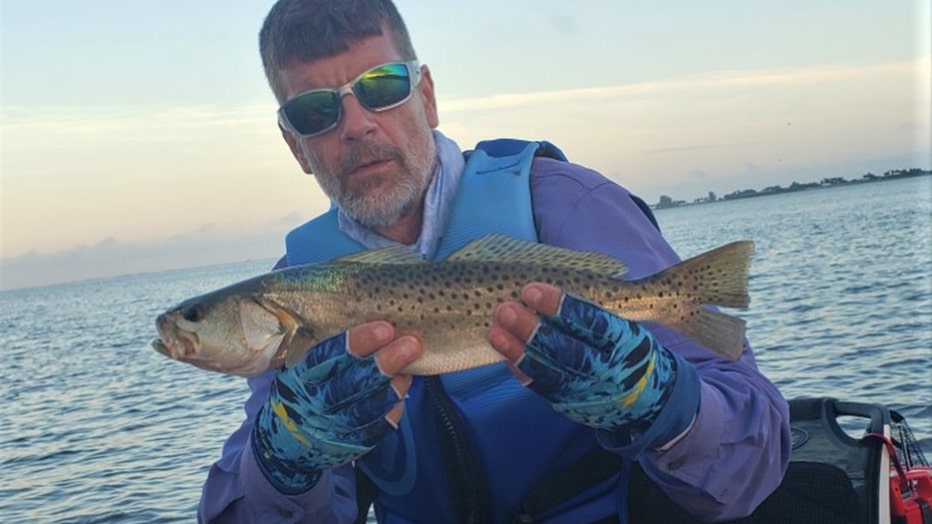 We are finding some cobia around the bay and along the beaches. They will take artificial lures that mimic eels quickly -- if you happen to spot one of these fish swim by you on the flats, at the pier or on the markers around the Bay.

Triple tail, like cobia, are found around the buoys, markers or any other floating debris in the bay and along our beaches. These fish are often in the same area so while targeting one or the other, be prepared for both. Triple tail love some live shrimp pitched close to their hiding spot on lighter tackle.

Mangrove snapper are very active still around the local bridges, piers, jetties and docks. They love lighter tackle with shrimp or greenbacks and a smaller 1-2ot hook. These guys are most active and prolific in the summertime, so go get them while the getting is good.

As the water cools, we are starting to see the pompano, sheepshead and flounder bite picking up. More information on these coming soon. I’m looking forward to the cold fronts this weekend. We are hoping these guys get these fish moving in more and more and they will be more ready to cooperate for us. 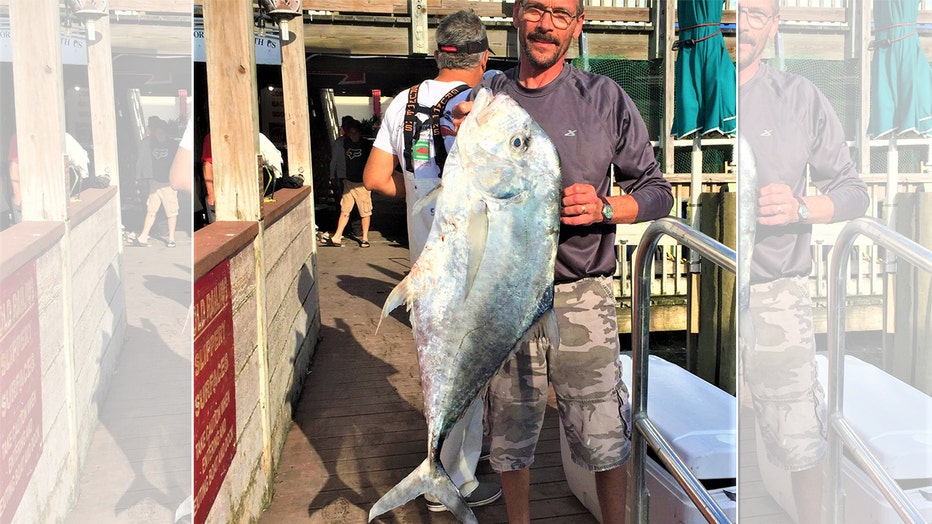 The mackerel are thick near shore right now. We are seeing them from the beach, out to around fifteen miles from shore or more. There’s plenty of bait schools out there holding lots of aggressive and quick-biting mackerel. Plus, we are even seeing them come up while bottom fishing biting our baits as we are dropping to bottom or reeling up.

Kingfish are around as well but not as thick as we were hoping or used too this time of year. Still waiting for the big push of kingfish that make our near shore waters teem with big kingfish action. We are seeing better numbers offshore, but definitely still waiting near shore for the “kingfish run.” Not to say we aren’t catching a few, but typically when they are thick, we are catching a half dozen or so on our half days and a dozen or so on the all day trips. Right now, it’s more like a quarter of that action, and we’re hoping to see more soon. Maybe this weekend’s front will be the magic we need.

Hogfish action is going well near shore. We are seeing lots of these guys from around 30 to 70 feet of water on our five-hour half days and ten-hour all days. They are a little tough to get dialed into but once they are biting, typically, you can get a few before the bite shuts down and you got to move on to the next spot.

Lighter tackle and live shrimp is key with a super natural presentation. The Nekid ball jig, just plain jig head or the knocker rig methods all with live shrimp seem to continue to be the best options for catching some hogs.

Snapper bite has been consistent lately. We are seeing nice big lane snapper around 60 to 100 feet of water on shrimp, squid or cut threadfins. Plus, the mangrove snapper are around too but they are mostly a little deeper.

Vermillion snapper mixed in out deeper and they love the squid on lighter tackle.

Grouper action is a little hit and miss near shore, but out deeper closer to around 80 to 100 feet of water we are finding a few red grouper and the gags are starting to move in too. The gags will continue to get better and better as the water cools and red grouper will continue to be a little spotty. 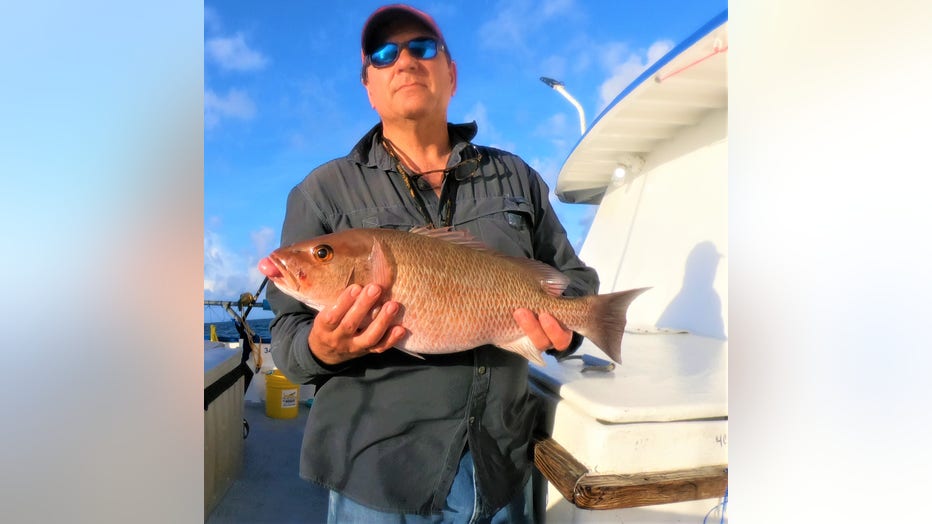 The big news lately, offshore, has been the plentiful and active pelagic action. We have caught two sailfish recently, some big kingfish, a few blackfin tuna and even a big mahi mahi. Most of these were caught while flat line fishing or vertical jigging, while bottom fishing for snapper and grouper. However, we are seeing the kingfish and tuna while trolling as well.

The rougher weather, as of late, has made the trolling a bit slow but when weather allows, it has been productive with the Rapala Xrap plugs, the Yo-Zuri bonita, and the skirted plugs we have in our shop.

Snapper fishing has been pretty good out deep as well. The vermillion snapper are big, out deeper past around 140 foot of water. We are catching plenty of them shallower than that, but they just aren’t the monsters we see out closer to 160 to 200 feet of water.

They love the double snell rigged threadfins cut into plugs on 40-50lb test with around 5-6ot hooks. We are seeing a few yellowtail snapper out there too. they love the squid pieces like the vermillion or the shrimp.

We had a pretty good bite of amberjack the last week or two. However, amberjack season has concluded as of yesterday, but we still have plenty of grouper and snapper and pelagics to go after offshore.